Release day for THE SORCERESS QUEEN AND THE PIRATE ROGUE! 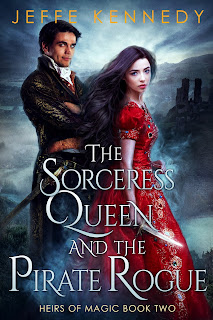 Today is release day for THE SORCERESS QUEEN AND THE PIRATE ROGUE!

“I thought I was ready for The Sorceress Queen and The Pirate Rogue but I clearly wasn’t. I eagerly anticipated it but I was in no way shape or form ready for how this book arrested me and held me captive for the duration. I loved Stella and Jak’s even though my heart took up residence in my throat for its entirety. There’s action, adventure, sexual tension, love and so much more. I loved it and can’t wait to be wrecked by the next book in the series.” ~ Timitra on Goodreads

Stella has always been one to count her blessings. Empath, sorceress, shapeshifter, and healer, she’s grateful for the gifts the goddess of shadows has bestowed upon her. Yes, she’s sensitive to emotions and can’t bear to be in large crowds for long. And yes, that means she’ll never be able to take a lover as she’s unable to withstand physical contact with anyone but her twin brother. Certainly now that he’s found his true love, she feels more alone than ever. None of it haunts her, however, like the vision of the lonely tower where her life path ends.

Jakral Konyngrr is a man of simple tastes: good whiskey, some coin in his pocket, and a fine blade in his hand. Though he’s no prince, not a shapeshifter, and not blessed with any magic, he’s happy in his skin. And yet he seems doomed to live the life of a hero from a tragic ballad, because the only woman he’s ever wanted barely knows he’s alive. As much as Jak longs for Stella, he’s resigned himself to being forever in the background. At least he can guard her back.

A Quest to Stop a Monster

But now Jak and Stella have been thrown together—along with a mismatched group of shifters, warriors, and sorceress friends—chasing and attempting to avert magic rifts that release monsters into their world. Worse, the strange intelligence behind the bizarre and deadly attacks seems to have developed a fascination for Stella. Battling for their lives and the good of the realm, they must fight—and perhaps love—together to alter the course of the future before it’s too late.

Incidentally, our topic this week is: INTJ (Myers-Briggs personality typing system) personalities in relation to writing. Of the four primary cognitive functions, which one are you and how does it affect your writing? Intuition, Sensing, Thinking, and Feeling.

For the record, I am INTJ. I think a lot of writers are. *Mastermind fistbump*

Did I mention it's release day?? Even an INTJ gets a little giddy!