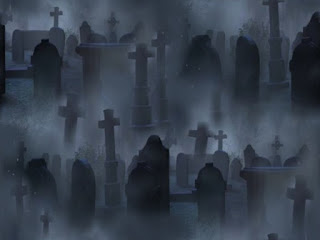 Ah, the cemetery of dead works. The gravestones list and limp far into the distance. Some mark the resting places of stray ideas that never had a chance to mature. Others memorialize stories and characters that almost made it. Some stones stand guard over the ones that never stood a chance.

Occasionally, in keeping with the philosophy that nothing is ever wasted, I take my shovel into the damp night and rob a grave. Metaphorically, of course, because really, it's just a question of searching some computer files. The thing is, I almost never resurrect a corpse, dress it up, and then teach it to sing 'Putting on the Ritz'. Instead, I slice the heart, guts, or brain out of the poor dead thing and transplant the organ(s) into whichever patient is on my table at the time.

Situations. Snippets of dialogue. Whatever suits the more viable subject being stitched together. Mad scientists and evil geniuses should only ever plagiarize themselves, in my view. And then, only once. One heart cannot be sliced in half and shared between two patients if you expect either to live.

Thining back across the stories in my files, the only time I resurrected the dead, the story was only mostly dead. With a little magic called 'a competent editor', that story didn't just walk, it grew wings. Maybe it is all dressed up and singing 'Putting on the Ritz'.