Release Day: THE GODLESS by James A. Moore

James is super busy this week with his dual launches! The first is his Halloween anthology HALLOWEEN NIGHTS: TALES OF AUTUMN FRIGHT that he mentioned yesterday and the second is today's release of the fifth book in his Seven Forges epic fantasy series. If you haven't begun the journey with the Sa'ba Taalor and Andover Lashk of the Iron Hands in the SEVEN FORGES, start here. 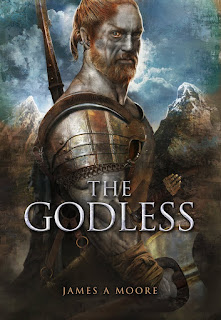 The long war with the Sa'ba Taalor has ended, but the land of Fellein does not know peace – only ceaseless change.

A spate of murders draw the interest of Darsken Murdrow of the Inquisition, until the hunter becomes the hunted. Andover Lashk of the Iron Hands seeks a home in a world in which he no longer fits. An unholy necromancer steals souls, makes sacrifices, and sows fear.

And in the barren wastelands of the Wellish Steppes, the army of the Godless gathers. Driven from their homeland, abandoned by their deities, the Godless now follow the banner of a new Master, and are thirsty for blood.