You're not bored, I'm bored 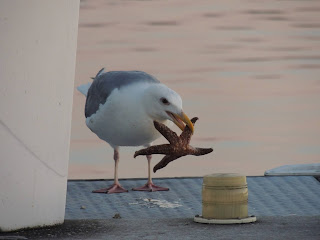 Y'all. Authors are like seagulls. We like to bite off more than we can chew. Most of the time, we're scrappy enough that getting what we wants excites us and we scream after it with abandon. When we're like this, we're writing great guns and while we might not be at our most coherent, we're probably not boring ourselves or anyone else.

Sometimes, though, we're wounded seagulls limping, pathetic, and begging for scrapes. Getting words may or may not be akin to squeezing blood from a stone, but I guarantee we're bored and burned out and neurotic and second guessing every last thing we say, think, or do. We're bored. Bored. Bored. BORED.

But. Because neither seagulls nor authors are entirely rational animals, our boredom has no bearing on whether readers will be bored. It's because while maybe we aren't feeling a story, we're still authors. We still know how to do the job. We know how to structure a story. Also, it's because it's super likely that it isn't the story we're bored with.

We're bored with ourselves. We're bored with our neuroses, and we know on a deep, subconscious level that something may be wrong with the story. That's what kicks us in the self-confidence. We'll sit and struggle with the problems in our stories, trying to choke them down and keep making progress. Remember. We're pathetic, emotionally stunted, injured seabirds here. We're already a neurotic mess - especially about our writing. Problems arise when someone comes along with the well-meaning advice that when we're bored our readers will be bored.

It's a fast-track to a complete freeze. Frozen seagulls poop (a lot) in terror. Frozen authors -- yeah, who knows? I'm afraid to look. I only know that when I'm bored with a story, it's because my neuroses are lying to me. Yes, there might also be something wrong with the story. But I cannot let that stop me. I need to keep writing. That's how I finally figure out where and how the book is broken. During it, though, I'm already second guessing myself into oblivion. Being told I'm probably boring my readers just buggers up the works even more.

So. "If you're bored, your readers will be too." It's pithy. It might be cute on a tee shirt. But the quote needs to be yeeted into deep space cause that cute little one liner t'ain't necessarily so.

My job as a writer is to let a story be what it needs to be. Initially. If your draft is boring, who cares?? No one sees that. It's yours. Besides, there's an excellent chance that your assessment is dead wrong and you're just sick of the story. Either way, the proof and power is in the rewrite.And that's where your power lies. Mine, too.

I'm a hopeless, pathetic seagull when I draft. I'm a seagull with a switchblade when I edit, though, so boring better watch out. I'm coming to carve up a manuscript.

Email ThisBlogThis!Share to TwitterShare to FacebookShare to Pinterest
Labels: "If You're Bored Your Readers Will Be Too", bored, Marcella Burnard, neuroses