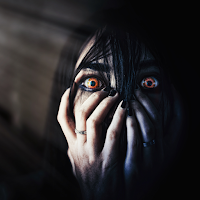 This week's topic is our scariest book or book with the scariest scene. I don't feel like I write anything super scary. Intense, perhaps, and slightly evil, but not scary. At least it isn't to me. I may be a poor judge since it's my own work, but I'm definitely no horror writer.

For me, the scariest thing to write was in The Witch Collector. I can't say what that scene is without spoiling things, but the imagery certainly gave me eerie vibes. It takes place in an enchanted frozen forest and involves an unexpected occurrence that endangers the main characters. While the book has a romantic subplot, the main plot takes a few turns into darker territory.

If you're curious, you can snag The Witch Collector now. There's even a hardback available for pre-order and there's a Goodreads giveaway going on through 10/31. 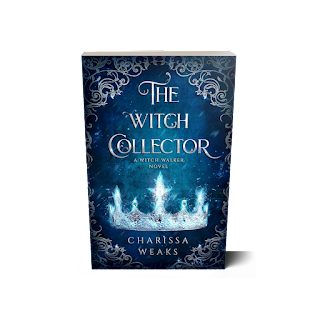 Every harvest moon, the Witch Collector rides into our valley and leads one of us to the home of the immortal Frost King, to remain forever.

Today is that day—Collecting Day.

But he will not come for me. I, Raina Bloodgood, have lived in this village for twenty-four years, and for all that time he has passed me by.

Raina Bloodgood has one desire: kill the Frost King and the Witch Collector who stole her sister. On Collecting Day, she means to exact murderous revenge, but a more sinister threat sets fire to her world. Rising from the ashes is the Collector, Alexus Thibault, the man she vowed to slay and the only person who can help save her sister.

Thrust into an age-old story of ice, fire, and ancient gods, Raina must abandon vengeance and aid the Witch Collector or let their empire—and her sister—fall into enemy hands. But the lines between good and evil blur, and Raina has more to lose than she imagined. What is she to do when the Witch Collector is no longer the villain who stole her sister, but the hero who’s stealing her heart?

The Witch Collector is book one in a thrilling romantic fantasy trilogy, perfect for fans of Naomi Novik, Sarah J. Maas, and Jennifer L. Armentrout.

"If you like your fantasy with complex magic, an intriguing protagonist, a powerful romance, and a great cast of supporting characters, I highly recommend The Witch Collector. Charissa Weaks's high-stakes storytelling will leave you waiting eagerly for the next installment." — Juliet Marillier, award-winning author of the Warrior Bards series

A romantic, fraught and fantastic journey through war-torn lands and a deliciously malevolent enchanted forest. I loved the voiceless heroine who wields magical sign language and the tormented hero determined to keep her alive and save an empire. Welcome to a compelling new fantasy world and a truly epic tale!

"The Witch Collector is a magical, enchanting, fantasy romance whose pages are filled with threads of love, loss, and healing. Highly, highly recommended for anyone who loves fantasy romance, fantasy with strong female leads, unique magic systems, and beautiful writing." — Alexia Chantel/AC Anderson, Author of The Mars Strain

I hope you have a blessed All Hallows Eve and a great week leading up to it!