This week's topic here at the SFF Seven is writer fashion. Since I'm terribly boring with my yoga pants and t-shirts, I decided to share something bookish instead. 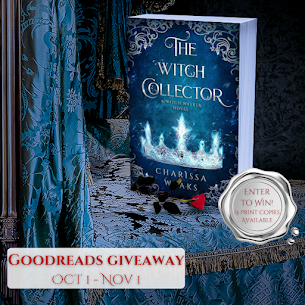 The Witch Collector release is a month away! In preparation, there's a Goodreads Giveaway the entire month of October. 15 signed paperbacks are up for grabs :)
Here's a little book info!
Advanced Praise
“The Witch Collector is a finely woven tapestry of everything one could desire of fantasy—compelling characters, intricate world-building, gripping action, and burning romance. The threads of this story sing in Weaks' skilled and passionate hands." — Annette Taylor, Bookstagrammer and Early Reviewer
"The Witch Collector is a magical, enchanting, fantasy romance whose pages are filled with threads of love, loss, and healing....Highly, highly recommended for anyone who loves fantasy romance, fantasy with strong female leads, unique magic systems, and beautiful writing." — Alexia Chantel/AC Anderson Author
"The Witch Collector has everything you want in a fantasy story - characters with depth, cool magic, political intrigue, ancient gods, a sinister villain, and exquisite romantic tension building. Up there with the best!" — Emily Rainsford, Bookstagrammer @coffeebooksandmagic
About the Book
Every harvest moon, the Witch Collector rides into our valley and leads one of us to the home of the immortal Frost King, to remain forever.
Today is that day—Collecting Day.
But he will not come for me. I, Raina Bloodgood, have lived in this village for twenty-four years, and for twenty-four years he has passed me by.
His mistake.
Raina Bloodgood has one desire: kill the Frost King and the Witch Collector who stole her sister. On Collecting Day, she means to exact murderous revenge, but a more sinister threat sets fire to her world. Rising from the ashes is the Collector, Alexus Thibault, the man she vowed to slay and the only person who can help save her sister.
Thrust into an age-old story of ice, fire, and ancient gods, Raina must abandon vengeance and aid the Witch Collector in saving the Frost King or let their empire—and her sister—fall into enemy hands. But the lines between good and evil blur, and Raina has more to lose than she imagined. What is she to do when the Witch Collector is no longer the villain who stole her sister, but the hero who’s stealing her heart?

The Witch Collector is book one in a thrilling romantic fantasy trilogy, perfect for fans of Naomi Novik, Sarah J. Maas, and Jennifer L. Armentrout.

If you enter, good luck!