Ah, the self-promotion thread. This was a post I did not want to write. Not just because I'm uncomfortable with self-promotion (because I'm a socially awkward dork) but because doing this post forces me to admit that the past two years have been a creative wasteland for me. Am I sitting on a work in progress where I know what happens? Yes. It is on contract? Yes. Have I been able to make a damned bit of progress on it? Not so far. Working on changing it - on changing me. Until then, if you want a low cognitive lift, fun and games story, I've got you covered.

The last thing I wrote and published is a fluffy little bit of mind-candy about a witch forced to work with a vampire to solve a murder. 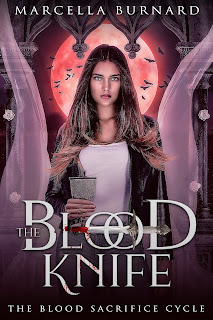 Someone is sacrificing innocent people in the Seattle Underground. The murderer is trying, and succeeding, to raise a rogue vampire assassin. Rose Buchanan has the magic and the will to stand toe to toe with Vampire Magic. Including that possessed by the gorgeous blue-eyed vampire assassin who kidnaps her in a bid to pull a suspect list from her mind. When he can’t overcome her will, he releases her and sets out to woo it from her instead.

When she’s freed, Rose is more than ready to stake herself a vampire, but he’s a witness to the three murders. She can’t destroy him. Yet. Worse still to have to try to work with him when he keeps dialing the charm to 13.

Gethin is a vampire assassin forged long ago to police the Vampire Nation under the control of the Vampire Council. Now, the council believes the time of the assassins has passed. One by one, Gethin’s fellow assassins and their Blood Knives have been destroyed. Only he remains, his Blood Knife in the hands of a murderous, unhinged human.

Rose has a choice to make. Destroy Gethin or find a way to free him and make the entire Vampire Nation her enemy.