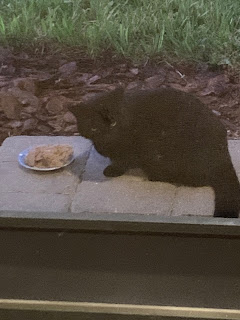 New Year, new stray cat in the neighborhood who found the sucker sign hung out on my door. This is Hemingway. He started coming around in the early morning darkness to get yelled at by my cats. He wouldn't let me even look at him. He'd charge away at a dead run. The good part is that someone had clearly already caught him once. He's ear tipped, which means he's already neutered and vaccinated. He went on being really shy and elusive for months. It was clear he had someone caring for him. His body condition was too good.

This holiday season, though, something changed. He began coming around more often. A lot more often. I managed to get a plate of cat food out to him one morning. Instead of running away, he crept onto the back porch and ate like he'd never seen food before and might never again. He was skinny. I suspect whoever had been feeding him either got sick or moved away. Our handsome, solid black cat with gold eyes shows up every evening and most mornings, ready for his hand out. And yes. He is a polydactyl. The boy is graced with a couple of extra thumbs on each front paw.

My cats have gone from being offended by the trespasser (and complaining loudly about it) to sitting at the back door to watch him eat. I'd like to trap him and bring him in to assess his socialization. If a cat can settle into life indoors with humans, a cat should have that opportunity for two reasons. First - cats live longer, healthier lives indoors. Two - outdoor cats have a hand (a paw?) in stressing songbird populations.

Since Hemingway has warmed up quite a bit - I'm now allowed within three feet of him. He'll look me in the eye and ask for more food. I'm comfortable saying he's not really feral. It's clear he knows what people are and I think he's learning from my cats not to be afraid. The only hitch is that he's trap wise. If I put the live trap out, he won't come anywhere near. So I'm going to have to be much sneakier. However, the rescue I usually work with is currently shut down to quell a terrible upper respiratory infection that's running rampant through their cat population. So we're all on hold, caught in the liminal space between aspiration and action. Seems appropriate for New Years Eve when you're waiting for the old year to end and for the new one to begin.