📚💖As temperatures rise, so does the steam in Jeffe's 4th book in the Heirs of Magic Fantasy Romance Series. Out Now! 💖📚 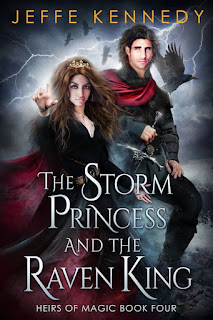 The Storm Princess & The Raven King

Princess Salena Nakoa KauPo thought she was over her broken heart. She’d put her first love and childhood sweetheart, Rhyian, firmly in the past where he belonged. His bitter betrayal of her was locked away deep inside, along with her foolishly innocent hopes and dreams. Now Lena has been thrust together with him, the prince of shadows, the one man she could never resist, on a mission to save the world from a terrible cataclysm. Worse, Rhyian refuses to believe her when she says there’s no hope for them.

Rhyian is rather accustomed to being a failure. Goddesses know, he’s not magical enough for his sorcerous mother and not alpha enough for his father, the King of Annfwn. It hasn’t helped that he’s spent the last seven years trying to drown his sorrows—and to forget the one woman he ever loved, whose heart he carelessly shattered in a moment of weakness. Rhy knows he has to change to win back Lena’s trust, but how?

A Love That Can’t Die

As Lena and Rhy struggle to overcome the wounds of the past, they and their friends approach the final confrontation with the strange intelligence intent on rending apart the very fabric of their world. And it looks like it will come down to the pair of them to strike the final blow.

But only if they can build a new trust on the bitter past.