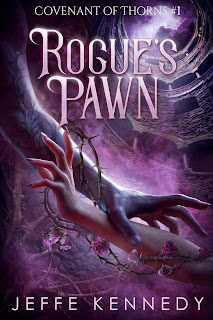 Things have been busy in my part of the world...

So much so that I missed posting for the last two weeks - and I'm posting late in the day today. Madness!

In book news, I got the rights reverted on the ten (10!) books I did for Carina Press. I started with my first dark fantasy romance trilogy, Covenant of Thorns, which meant new covers and new back cover copy (BCC). Done and done, times three. (What about the other seven books, you ask? I'M WORKING ON IT, OKAY?) I'll be re-releasing these three books over the next several months.

Be careful what you wish for…

When I walked out on my awful boyfriend, wishing to be somewhere—anywhere—else, I never expected to wake up in Faerie. And, as a scientist, I find it even harder to believe that I now seem to be a sorceress.

A pretty crappy sorceress, it turns out, because every thought that crosses my mind becomes suddenly and frighteningly real—including the black dog that has long haunted my nightmares.

Now I’m a captive, a pawn for the fae lord, Rogue, and the feral and treacherous Faerie court, all vying to control me and the vast powers I don’t understand. Worse, Rogue, the closest thing I have to a friend in this place, is intent on seducing me. He’s the most beautiful man I’ve ever seen, enthralling, tempting, and lethally dangerous. He’s as devastatingly clever as he is alluring, and he tricks me into promising him my firstborn child, which he intends to sire…

I don’t dare give into him. I may not have the willpower to resist him. He’s my only protection against those who would destroy me

Unless I can learn to use my magic.

Exciting milestone, to be re-releasing these!

As for the actual topics I'm supposed to address:

What do you see in your crystal ball for publishing? Will the Big 5 become the Big 4 and what would that trickle down cause throughout the industry?
I doubt that the merger that would make the Big 5 become the Big 4 will be approved. Even if it does, there are still other publishing houses that aren't the "big" ones. Also, traditional publishing is only one part of the market and one that's no longer at the forefront of everything. I think there's value to trad publishing still, but I also think most authors will become hybrid, since we want to be able to pay our bills.
Dear Hollywood: Which of your works would you most like to see made into a movie or miniseries What makes it stand out above the rest?
My Twelve Kingdoms and Uncharted Realms series. I really want to see these books as an ongoing miniseries, primarily because I'd love to write the other POVs that are going on simultaneously with the 1st Person POV of these books.
Your gateway drug: the book that made you love SFF
DRAGONSONG by Anne McCaffrey. I found it in my school library in 5th grade and it opened up a whole new world to me. Possibly also the first time I glommed an author's backlist.