The Future Is Near 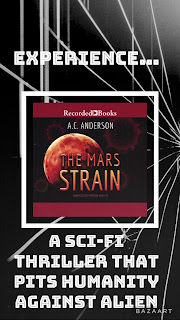 Anyone else enjoy reading the book before seeing the movie? If I know there's a print version I'll definitely look it up before seeing the flick—and yes, the books are better than the movies, but I love seeing the differences in what played out in my mind vs. the theatrical release.

When I read, I see the story in my head. Happens when I write too. Which is why I get giddy when someone listens to my audiobook and tells me they could see it happening like a movie! That was my goal as I pried this found-family, second-chance romance, sci-fi thriller from my brain!

So naturally, The Mars Strain would be my top pick for book-to-movie. There would be shots of Jules and her team in the lab, Zia directing the colony on Mars and trying failing to keep Gates and Hannah in line, Jake sneaking around Kennedy Space Center, under the radar, basically going wherever he wants to go because when you know everyone you can, and also heart pounding action as Jake and Jules transport the Strain to the CDC. It would be amazing!