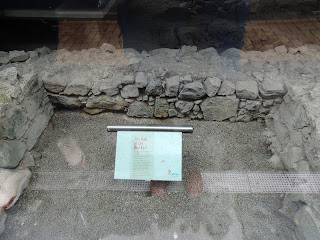 This is a photo (through glass) of an archeological site in Galway. The stones are the 12th century foundation of a castle found under several shops in Galway. It's called The Hall of the Red Earl. How's that for a name? Does it not evoke a bit of Game of Thrones?

The name has power. It's almost its own question - who was this Red Earl and *why* was he red? Also, who named him the Red Earl?

I ask that last because naming something claims that something. Names are ownership. We own our names and become our names in some weird synergistic fashion so that they own us. I can only illustrate what I mean by saying that I have never told anyone not to shorten my name. I've never told anyone not to call me Marcie. And yet no one does. One single person in my life asked if he could. I shrugged and said he could try. It lasted three days. Then he reverted to using my full name. Marcella. And he came to me and asked how I'd known. It's because if you've ever met me in person, you *know* I'm not a Marcie. It just does not fit. I don't look like a Marcie. Apparently, I don't act like a Marcie and here we are. I don't know why this is true, but it is. There's a difference between Jennifer and Jennie. Or between Anthony and Tony. This may be a long way of saying that I'm weird about names. I need character names to be *right*. If they aren't, I can't operate. This is the curse of the character-driven writer. Fortunately, I have options.

1. The weird roller coaster that is the inside of my head. When I have a character who needs a name, I usually start with a feeling and an initial sound. I usually know if I need a name to sound soft or hard or heartless or cold. From there, I already have a feel for whether the name should begin with a vowel or a consonant. How many syllables comes next. If there's an ethnicity I'm attempting to convey, that plays into shaping whatever name I concoct. This is to say that I make shit up. Sometimes what I make up equates to an official name that exists in our world. Sometimes it doesn't - as far as I can tell. This is my preferred means of coming with names because it makes me sit with the character and begin to become acquainted with their unique voice. That voice is associated with name and that voice is my key into the story. Win/win.

2. Baby name websites. If I'm coming up empty or I need a name that means something specific, I will resort to baby name sights with the full knowledge that my social media ads are gonna get really weird and off target for awhile. I like the sites that let me look at names based on their meanings. The thing that chaps me about them, though, is their insistence on gendering words. That's probably a me thing. But yes. I will occasionally use a name site to prompt me.

3. Video games. Especially MMOs. I pay attention to other player characters in the games I play. I watch their names. Most are d@ngrboi3 or something. But a few people put real thought into names. NPCs sometimes have interesting names. I pay attention to credits to movies and TV shows, watching for names to add to my running prompt list. It's nothing super official - a running list of names I jot down in a Word doc and keep in a file. I listen to the Latin names of species - flowers, insects, animals. Some of those offer up evocative sound combinations that can be tweaked for story use.

None of this even touches on the power of names or the notion that if you know the true name of a thing, you have power over that thing. But for me, when I'm naming characters, it's true. Without being able to name my characters, I have no power. Without power, I have no story.