Taking a Break from Drama

Funny that we should be writing about author drama this week. Because you'll note that I've been a no-show for a few trips around the ole blog cycle. I'd like to think I had a good reason - but I suspect that's how most author drama starts. With the best of intentions. >>Peers at Twitter. Okay. Maybe not.

Anyway - I bailed because I went to Ireland.So accept this writerly drama in the form of a few photos: 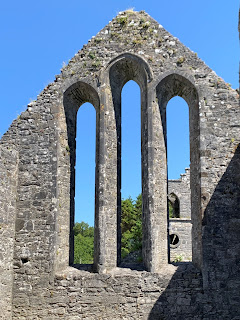 This is the Abbey at Cong. 7th Century. Lovely old ruin with a familiar story. Everything was going along just fine for the monks living here until the Vikings landed and started killing everyone and taking their stuff. 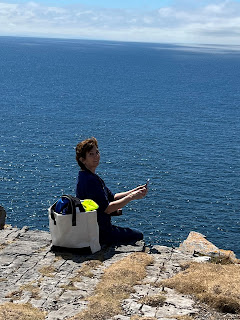 This is at Dún Aonghasa on Inis More in the Aran Islands. It's an old        ring fort overlooking the Atlantic Ocean. That cliff I'm sitting on goes        100 feet down to crashing waves - but I swear I am NOT sitting on the         edge of  the world. There was another sizeable slab of stone under my     feet. 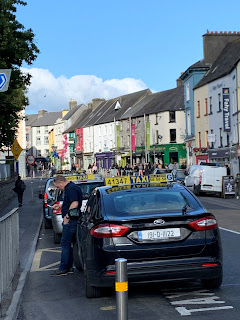 This is Galway. Lovely little city. It is the oldest port in Ireland. There are buildings still standing and in use that were built in medieval times. Recent archeological investigation discovered 12th century castle ruins just beneath the shopping district. Many of the businesses have put plexiglass into the floors to expose a bit of the history. The streets in Galway are startlingly narrow. Because the city is medieval in design, the roads were built for horse and buggy rather than cars. Houses and shops stand right up at the edge of the roads. Two buses meeting and trying to pass can be an adrenaline rush.
This is just an short snippet of the River Corrib in Galway.