Reviews, Rejections, and Other Opinions 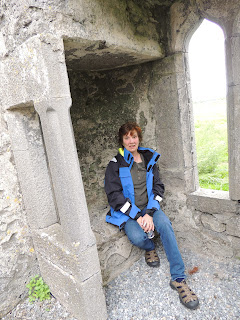 You want to know how I handle rejections, critical reviews, and other opinions? The facial expression of this photo of me in Ireland (at a 14th century monastery ruin) pretty much covers it. "Whaddya mean NO?"

Yes. You're going to get a lot of Ireland photos for the next couple of weeks cause I came home with 200+ and frankly, there's jack all to take photos of around here in the sweltering heat where everything and everyone is just melted.

Listen. I don't know what it is about my make up - or my particular mental dysfunction - but most of the time, rejection and shitty reviews don't get me down. I've got a mental filing system for rejections and bitey reviews.

Second file: Whiny one stars. These are the reviews people leave on a book that make me laugh and/or wonder aloud if they actually read the book I wrote. The second cousin to that review is the one star that whines 'man, this is nothing new or interesting why does everyone else like it?' Both of these reviews say more about the people leaving them than they do about my writing or story. Again. Easy to blow off (or leverage for a reverse psychology advertising campaign in you're into that sort of thing.) The first one is pitiable and the second is whining because their 'nothing new or interesting why does everyone like it' cry is code for 'I had an idea like this! How dare you write it!' Ask me how I know that and I'll show you the story I started in 8th grade (and never finished) that sounds a whole lot like the movie ET that came out a few years later and was a far better story anyway.

Third file: Rejection with cause. Critical reviews with specifics. NOW we're getting into the daggers to the heart. These rejections and reviews come from editors/readers who obviously read my work and read it thoughtfully. They've identified problems or issues I failed to address or that I hoped no one would catch. Occasionally, someone will catch something I was entirely blind to in a story. I'm pissy about the first and grateful for the second. I get het up about having issues and problem identified *when I knew about the issues and ignored them* - but note. I'm not mad at the person who called me out. I'm mad at me for thinking I could get away with it. Dumb move, author. For the people who call out issues I didn't see, I still get mad at me for not seeing it, but I'm grateful to having my eyes opened to it so I can fix it. It's possible I give myself a 24 hour pity party after it all hits before I have to adult up and fix my mess.

Fourth file: This one stings, y'all. This is BIG pain. Rewrite on spec and STILL get a reject. Not winning contests when a story finals goes in this folder, too. This one is when an editor asks for revisions on spec - they're asking for work with no guarantee that they'll acquire when that work is done. Of course I have to take the chance. I'm going to invest that time and that energy knowing that it may still not be good enough. It's that sunk cost that hurts when I feel like I got SO close (both in edits and in a contest) only to have what feels like the prize yanked from my fingers at the last second. Of course the 'prize', whether statue or contract, was never mine to begin with, but dang if my fingertips didn't brush if just for a second. The other tough aspect here is that when a rejection finally comes or a book doesn't win a content, there's no why. Typically, the editor won't go into reasons why the rewrite didn't hit the mark. They just say, 'not going to work for us. Good luck.' and contents say nothing at all. That twists the rejection knife becuase there's no clear action I could take to make my writing better. Again, I'm allowed to sulk like I'm three. But only for so long. Then to get past this, I have to turn my eye and my thoughts to what's next - the next goal, the next target, the next whatever it is.

I suspect, for me, that having a new goal to move toward is the secret to recovering from rejection. I need activity - some new shiny to chase. I do have to give myself space to wallow in messy reaction. Based on my brain, I know that I have to sit with something emotionally loaded for 24 hours before the gears will shift. When those gears shift, ideas start rolling. The 'what if' thinking starts up - it's like having a relentless five-year-old in my head throwing "What if this happened? What if that happened? What if we . . .?" At that point, I'm not longer focused on the rejection. I'm focused on solution. Which may include getting spiteful and saying, "Fine. Your loss. I'll self-puh."