Of Brush Fires and Distractions While Writing

So my week hasn’t exactly been normal, starting on Tuesday right before lunchtime when my son-in-law had to grab the baby and the cat and literally drive out of their apartment complex parking lot as fire was burning down the hillside above. (Sometimes the mandatory evacuation orders don’t arrive until a few hours after you needed to be OUT, so stay aware if you live in a brush fire zone!).  My daughter and her family sheltered here all week in my apartment and we did our best to make it as stress-free as we could, all the while wondering what the fire was doing. 0% contained for two days…fortunately the huge winds forecast for two nights ago never did materialize in our vicinity and the wonderful firefighters got a handle on the fire. I’m always supremely grateful to the men and women of the various fire departments involved when these brush fires start up. (Well grateful to them anytime, of course but especially during the grueling fire ‘season.’) Our little drama has a happy ending – the mandatory evacuation order was lifted today, the apartment complex didn’t burn and now they are back at home.

The baby was resilient, as babies are, although plainly puzzled by various things, including two ‘new kitties’ (mine) who did not wish to be petted…the lack of his crib, his toys….

I got no writing done. Too much else needed doing! I did manage to keep my commitments on blogs and other activities but my hero and heroine of the next book are stuck in limbo. (I did have a new release on Monday – details below – a new series starter!).

In general, I prefer to write in silence, at my desk, with sleeping cats strategically located nearby. I could never write in a coffee shop or other public place. I like to sink into my own zone, be in the flow and just write….I can block out distractions, but I’d rather not have them there to begin with! When I was younger I used to write to a soundtrack, nothing particular, just an endless mixtape of my favorite songs, but starting a few years ago I found that was too distracting. 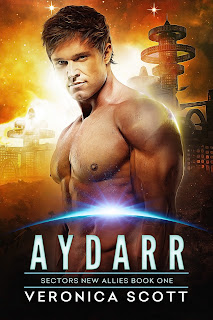 The blurb for the new book, Aydarr (A Badari Warriors SciFi Romance Novel): Sectors New Allies Series Book 1:
Jill Garrison, a maintenance tech at the Sectors Amarcae 7 colony, goes to sleep one night as usual only to wake up in her nightgown stranded in the middle of a forest on an unknown world. There’s no time to think as she’s stalked by carnivorous predators and rescued by genetically engineered warriors calling themselves the Badari. Turns out they and she, along with her whole colony, are now prisoners of the Khagrish, a ruthless race of alien scientists. Working for enemies of the Sectors, the Khagrish have created the Badari to be super soldiers.

Aydarr, the Badari alpha, isn’t sure he can trust Jill but his attraction to her is undeniable. He impulsively claims her as his mate to prevent her death at the hands of the Khagrish.

Can he continue to protect her from the experiments already underway?  Will his claiming her put his pack in jeopardy from their alien masters?

A quick excerpt as the novel begins:
Why am I lying face down on the wet grass in the rain?
Jill rolled over, putting a hand to her forehead in an attempt to quell a ferocious headache. Opening her eyes gingerly, she blinked at the vividly colored pink, purple and blue leaves on the tree above her, which certainly had never grown on Amarcae 7. She’d been all around her home colony on various repair jobs, and nothing there had riotous leaves in these colors, much less with spikes at the tips. As she watched, one of the leaves snapped into a tight roll to capture a slow moving insect.
“Thank the Lords of Space I’m too big a bite.” Wary, nauseous, she sat up, swaying a bit, and examined her unfamiliar surroundings. She was in the midst of an old growth forest, with other forms of vegetation besides the carnivorous trees but nothing recognizable.

A loud roar in the distance gave her the shivers, and she forced herself to stand, staggering a few feet to lean on a less colorful tree’s broad trunk to stay upright. Despite the rain, her mouth was dry, and she had a hard time swallowing. “What the seven hells?”

Her mind was curiously blank, no memory of how she’d gotten to this place, or what had happened in the last few hours. She guessed it might be late afternoon here, from the glimpse she got of the white sun above the horizon, before the clouds drifted in front of the orb again. She refused to contemplate the fact that the star providing heat and light to her colony was yellow. If the sun here was white hot, the reality of where she stood, lost in the galaxy, was terrifying.

She remembered eating dinner in her small modular house on the edge of the colony, falling asleep watching an adventure trideo she’d seen a hundred times then…nothing.

“And now I’m here.” She took a closer look at her left arm and did a double take. A black bracelet she’d never seen before was solid against her skin just above the wrist, with no visible hinge or fastening. As she gawked at it, prying at the edges in an increasingly desperate attempt to make the band move, flickers of red and yellow pulsed inside the cool, hard surface. The bracelet and what it might mean scared her more than the loss of short term memory or even the unknown sun above her.

The roar came again, closer, and was answered by another. Something hunting me maybe?  Distracted from the ominous mystery of the bracelet, she was briefly tempted to try climbing the tree, but the lightheadedness persisted. Also, the smooth trunk didn’t offer anything in the way of handholds. She pushed off, realizing she was barefoot, wearing her short, pink-and-black nightgown, molded to her body by the rain. Lingerie was her secret luxury after a day spent in technician’s coveralls, but certainly not suited to this experience.

Am I dreaming? She paused, gazing at the sky and pushing her damp hair off her face. The shower had tapered off and now the sun was shining but an ominous gray storm front was advancing. A bolt of lightning arced across the sky, and Jill broke into a zigzag run, forcing her body to respond to her terror. Standing anywhere close to a giant tree in a thunder storm was a recipe for disaster.

I’m in a nightmare, not a dream, but it’s all too real.