Release Day: Amid the Winter Snow & Aydarr: A Badari Warrior

In the throes of holiday shopping?  Perhaps you're done...or maybe you're procrastinating. Treat yourself and a friend to an anthology of fantasy romances with Amid the Winter Snow or to a steamy SciFi romance with Aydarr. Why not buy both? The anthology features a story by our own Rita® Award winner Jeffe Kennedy, set in her much-beloved world of the Twelve Kingdoms. Aydarr kicks off a new series for Veronica Scott. 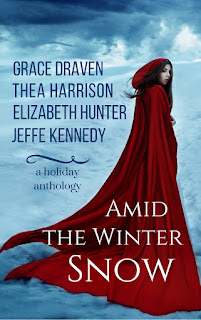 AMID THE WINTER SNOW

As the snows fall and hearths burn, four stories of Midwinter beginnings prove that love can fight its way through the chillest night…

THE DARKEST MIDNIGHT, by Grace Draven
The mark Jahna Ulfrida was born with has made her a target of the cruel and idle all her life. During the long, crowded festivities of Deyalda, there’s nowhere to escape. Until a handsome stranger promises to teach her to save herself…

THE CHOSEN, by Thea Harrison
In her visions, Lily sees two men fighting for her tiny country’s allegiance: the wolf and the tiger, each deadly, each cunning. One will bring Ys chaos and death, one a gentler path—but she’s destined to love whichever she chooses. The midwinter Masque is upon them, and the wolf is at her door…

THE STORM, by Elizabeth Hunter
When her soul mate died in a massacre of the half-angelic Irin people, Renata thought she’d never feel happiness again. She’s retreated to the snowy Dolomites to remember her hurts—until determined, irrepressible Maxim arrives to insist on joy, too. And before she can throw him out, they discover a secret the Irin have to know…

THE SNOWS OF WINDROVEN, by Jeffe Kennedy
As a blizzard threatens their mountain keep, the new Queen Amelia of the Twelve Kingdoms and her unofficial consort Ash face their own storm. Ash knows a scarred, jumpy ex-convict isn’t the companion his queen needs. But when a surprise attack confines them together in their isolated sanctuary, the feast of midwinter might tempt even Ash into childlike hope…

If you like your romances to be out of this world, then check out our Saturday blogger, Veronica Scott's, latest SciFi romance, AYDARR. 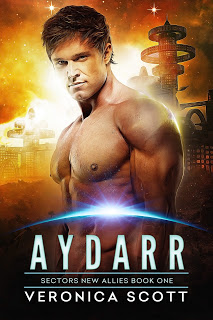 Jill Garrison, a maintenance tech at the Sectors Amarcae 7 colony, goes to sleep one night as usual only to wake up in her nightgown stranded in the middle of a forest on an unknown world. There’s no time to think as she’s stalked by carnivorous predators and rescued by genetically engineered warriors calling themselves the Badari. Turns out they and she, along with her whole colony, are now prisoners of the Khagrish, a ruthless race of alien scientists. Working for enemies of the Sectors, the Khagrish have created the Badari to be super soldiers.

Aydarr, the Badari alpha, isn’t sure he can trust Jill but his attraction to her is undeniable. He impulsively claims her as his mate to prevent her death at the hands of the Khagrish.

Can he continue to protect her from the experiments already underway? Will his claiming her put his pack in jeopardy from their alien masters?