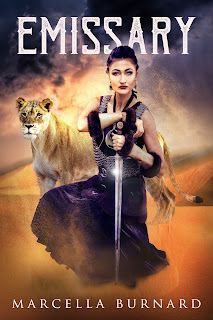 It's a cover for a short story that I'd written some time ago for an anthology edited by former blog member James Ray Tuck Jr. I've had rights back for a bit and the story just sat there because I couldn't, for the life of me think what to do with it.

Until I got tired of having dreams about pissed off lions. So I commissioned this lovely cover and published the story to Kindle Unlimited. Mostly because I'd never published anything there before. Look at me swimming in unfamiliar water. Really, I just adore the cover. So I had to show it off. Made by the fabulous Danielle Fine at By Definition.

As for book nostalgia, let's see if I can keep from repeating myself. I doubt I can.

1. The Witch of Blackbird Pond - I got on a kick at one point of reading all of the Newberry award
winners as a kid. It paid off. This one stuck with me. And hey. Late grade school, when I picked the book up, alienation and learning to adapt were big themes. I got Kit. Still do. 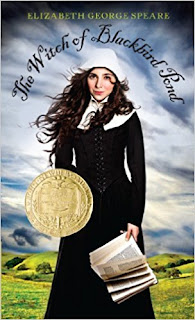 2. The Island of the Blue Dolphins - Tough story, but gorgeous writing and that was enough for me. It's one of those books that haunts you and it made me start making up stories about how I'd have gone out there to get Karana off the island. There may have been pirate ships and bargains with the devil in some of those stories. So I guess my adult brain didn't fall far from the little kid apple tree.

This last one is a cheat because it's three books in a box set.
3. The Wizard of Earthsea - though, frankly, it looks like the little blue-gray box set I have doesn't exist any more. So no secret that I love Ursula K. Le Guin's work. I cop to reading this trilogy when I was far too young, probably, to appreciate it for anything more than the series of events and adventures that happened. Yet, as often happens with content that's packed far fuller than a reader is consciously aware, the stories and characters stuck in my head and kept unpacking bits of the subtext and layers I'd been too young to comprehend. That meant I could go back and reread the trilogy and have a new experience each time. So yeah. I read Le Guin to have my cranial capacity expanded as much as for the love of great story.

And now, back to the word mines. I have a thing to finish. And by all the gods, it will end before the end of this year or I'll die trying to wrap it. So let's do this thing.

Email ThisBlogThis!Share to TwitterShare to FacebookShare to Pinterest
Labels: 3 kids books, Emissary, Marcella Burnard, new cover, reading nostalgia, The Island of the Blue Dolphins, The Witch of Blackbird Pond, The Wizard of Earthsea