We clearly have a theme going this week of cover reveals with James and Jeffe, so  I'm happy to continue it with the cover for the second book in my Immortal Spy Urban Fantasy Series. The amazing team at Gene Mollica Studios did the cover. 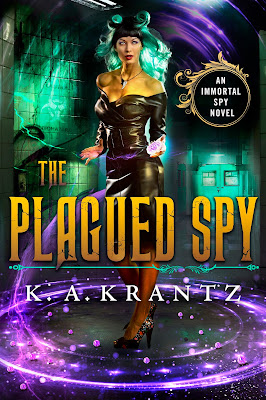 The book drops on April 24, in print and eBook.

Now, as for this week's topic of scheduling the writing and the business, I'm going to take a moment to laugh hysterically then sob a little. I am a girl who must plan All The Things. For those of you who've followed this blog for a while, you know I'm a slow writer. I'm still one of those writers who can't accurately estimate how long it'll take me to write a book. I took a year of publishing nothing to write the first three books in this series so I could drop them at regular intervals while I wrote the remaining four books. The plan is to release quarterly. I'll be able to do that with the first four...but there might be a six-month gap between four and five. Then hopefully back to quarterly for six and seven.

What happened to my beautiful plan?

In a nutshell, I learned more about me as a writer and a publisher trying to hold myself to a schedule. From a personal-development angle, I hadn't done that before. In my high-fantasy series, the books take as long to write as they take. That's what my creative process demands. However, I wanted to grow as a career author, so I committed to writing and publishing a series on a tight schedule.
A third of the way into this business experiment,  I've learned that some books will be easy to write. Some books won't require heavy dev edits. Some books will flip the bird and be the most recalcitrant little bastards. I am blessed in that my editors, artists, and formatters are top-notch and make their dates without issue. When there's lag, it's all me. I need to keep building my skills both on the page and off (pretty sure that'll always be the case).

So far, my biggest takeaway is that I can write two books a year, reasonably. Three is pushing it. Four is unrealistic for me. (I know, I know, many of my fellow SFF Seven bloggers are power writers, and that is awesome. Enviable in many ways. Hat tips to them!) Also, during the winter holidays, I should expect no creative progress and schedule no deliverables to or from. Yes, businesses still function and other contributors to my end products absolutely make their dates. It is my life that does not allow for much more than analytical work. That's good to know. I can adjust my schedules and expectations accordingly...once I finish this series.