Does Your Family Read Your Books? 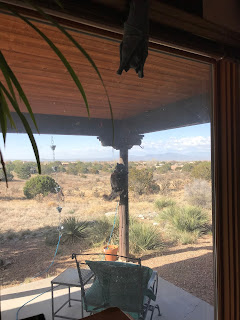 We have high winds today and Jackson is feeling the fever - here he is trying to climb the portal post. Spoiler alert: that's as high as he got.

Our topic this week is whether our spouses or close family read our books. I always find it interesting how widely this answer varies among writers - from those who cowrite with spouses, or rely upon them or close family to critique, to those whose families don't even know they write.

Seriously - I have a friend who was a journalist and wrote - and shopped - his first novel in secret, even from his wife and kids, because he didn't want them to know about it if he failed. Which... I can understand. It's an excruciating phase, the one where writers labor for years to hone their craft, often over multiple novels or hundreds of stories, with nothing to demonstrate to the greater world for the effort. A lot of writers give up in this phase, or self-publish in order to have "something" to show for all that work. There are few questions more invidious than "Oh, you're *still* writing that book?"

At the other end are the couples where both are writers and exchange work, or who collaborate together. I think collaborating with a spouse would be trying, although the team writing as Ilona Andrews does it brilliantly. I'm still amused by Ilona's explanation that they don't really fight over the storylines, but one of them might "angrily load the dishwasher."

As for me, my husband David does not read what I write, pretty much ever. Sometimes he hears pieces of stories at readings. But, overall, he doesn't read fiction. I'm okay with this. I think our close families can exert strong influence on us, and not always in the way that encourages to grow.

I taught Tai Chi for a lot of years, including an introductory class in continuing education, and it was always a bad sign when spouses took the class together. Or parent and child. Or sisters. (I don't recall ever having brothers take a class together.) Inevitably, they would start telling the other how to do it. Usually it was framed as being "helpful," but it rarely was. It got so that in partner exercises we'd make it a rule that they couldn't work with someone they knew. This was entirely to pry apart the people who knew each other far too well - and got in each other's way.

So, I don't mind that David doesn't read my work. It gives me a certain freedom to have that headspace to myself. My mom reads my books, but only after they're published. Some other members of my family read them, but largely most of them don't. I'm okay with that, too. Everyone should read what they want to!