Predictions! 4 of Mine and 1 Guest Prediction

Predicting the publishing future - my stabs in the dark heart of the publishing wilderness. Totally sounds like I should be filming a Predator movie somewhere. Alas. Not happening. Yet.

1. All the Eggs in One Flawed Basket - I'm seeing discontent and conversations going on about how certain LARGE empires are treating authors and books of certain genres. I see the call outs about how scammers are gaming said empire to the detriment of actual authors with actual novels. The writing on the wall says to me that the age of centralization is going to have to come to an end. If you are a reader or writer of content that isn't treated well, it's time to get subversive and create alternative outlets. I'm thinking of co-op publishing models run by the authors and readers themselves.
2. Newsletters Dying a Well Deserved Death - Yes, pretty much every single marketing guru out there who wants to tell authors how we're all doing it wrong (and given the number of people signed up for my mailing list *I* might be doing it all wrong) is pushing mailing list, mailing list, mailing list, I want hard numbers on open rates. Cause nobody under thirty that I know actually reads email unless coerced into it by work. My own email inboxes are so inundated that newsletters I willingly signed up for over time are now auto-filed in the trash. Only so many hours in a day and only so much bandwidth. Makes me sad. Do I know what's going to take the place? Nope. Not that clairvoyant. But when I want to know what an author I love is doing, I search for them on my book store of choice and start clicking buy buttons for the books I don't have.
3. Books that Have Actually Been Edited - This follows Jeffe's point about craft. A well written book is a book that has also been subjected to the fine and knowledgeable eye of an editor. I won't claim a book has to be perfect. It doesn't. But the plot holes need plugging. The turns of phrase need to make sense. Just because *I* know what I meant on page 163 doesn't mean that you know what I meant. I need an editor to tell me that the lengthy paragraph about the green and brown striped haviz makes no sense and maybe some of what I know in my head didn't make it to the page. So yes. I think books that have obviously been rushed and tossed online to cash in on something might start slipping as reader annoyance with such tomes begins growing.
4. Diversity - I suspect we'll begin to see authors of color and LGBTQA authors getting more subversive about publishing with co-ops. (I hope!) I don't see the major publishers, which seem to all be particularly tone deaf to the issues, pivoting on how they're asking their mostly white, straight authors to write diversity. We're already seeing authors using privilege to attempt to signal boost AOC and LGBTQA authors. I'm hoping for a lot more of that.
5. Hatshepsut's Prediction: MORE CATS! 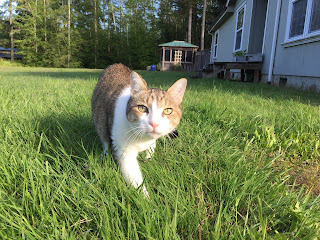 I will do my best.