First, an announcement. After literally 10 months of  reading, the final Table Of Contents for THE TWISTED BOOK OF SHADOWS is complete.


Why so long? Because we pushed as hard as we could for diversity in this anthology. We sent the message far and wide, that this would be an OPEN SUBMISSION and asked people to help spread the word to every market imaginable. What that meant at the end of the day was that we got just at seven hundred submissions.

Guys, that takes a while to read.

And you'd be amazed at how many of them were just plain excellent stories. I know I was. When we asked people to send their best, apparently they listened. There were a few exceptions, but only a few.

The submissions, by the way, were also BLIND. No names, no genders no nothing, but the stories and their titles and their word counts.

We had to gofundme to get the money up, but we got it. Six cents a word, up to 5000 words per story.

The Twisted Book of Shadows
Here we go, folks. Ten months. 700 stories. Profound thanks to Matt Bechtel for all of his efforts to ensure our blind submission process remained blind. James A. Moore and I could not have done this without Matt, nor would we have wanted to do it without the extraordinary help of our editorial committee, including Herculean efforts from Linda D Addison, Rachel Autumn Deering, and Lee Thomas, as well as the notes and efforts of Nadia Bulkin, KL Pereira, and Lamar Giles.
Thank you to every single author who submitted and waited patiently as we waded through all of the stories, many of them multiple times.
Coming this year from John M. McIlveen and his Twisted Publishing (via Haverhill House Publishing)...
Without further ado, here, in alphabetical order, are the contents of THE TWISTED BOOK OF SHADOWS.

THE TWISTED BOOK OF SHADOWS
(Final Order to be Determined)
Angelmutter by David Surface
At Least the Chickens are All Right by Trisha J. Wooldridge
Beneath Her Skin by KT Wagner
Brother Mine by Rohit Sawant
Cake by MM De Voe
Coyote by Jason A. Wyckoff
Elegy by Sarah Johnson
For Every Sin an Absolution by Kristi DeMeester
Groomed by Liam Hogan
Liza by Jeffrey B. Burton
Lydia by Cindy O'Quinn
Midnight Sun by Andrew Bourelle
Mirror, Mirror by PD Cacek
Records of the Dead by John Linwood Grant
Smeared Star in Your Hands by Sara Tantlinger
The Birthing Pool by Eoin Murphy
The Pale Mouth by Melissa Monks
Underground by George Murray
Unto the Next by Amanda Helms

Lessee: Write more.
Seriously. I spent a LOT of time doing other things this year, including working too many hours at the day job. Toward November this year I told them I could not keep working quite as many hours as they wanted. Love the job, need the time for my career. Simply because, now and then things go wrong in retail/customer service I wound up getting very behind schedule as I tried to keep up with demand on the work front and the writing front,
I've now cut back to more reasonable hours and they'll have to stay reasonable, because as a rule I write four novels a year, and sometimes more.
Also, I just plain have a lot of projects to work on, I have a novel due in a month or so, I really need to write that. Really. Seriously.

So with that in mind: May your New Year bring nothing but joy, prosperity and good health! Happy New Year!

Added news: Happy BOOK BIRTHDAY to me! GATES OF THE DEAD comes out tomorrow, wrapping up my TIDES OF WAR series. It was a blast! 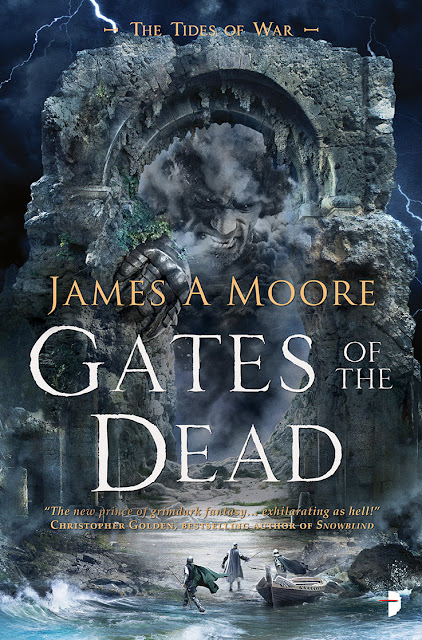 Anyone interested in meeting the author can find me at PANDEMONIUM BOOKS in Cambridge Massachusetts along with author Craig Shaw Gardner on January 10th from 7PM until 9 PM. You have been warned.

And on the same front HAPPY BOOK BIRTHDAY to be and by co-author Charles R. Rutledge, for our novella, CALL UP THE DEAD, which is included in the anthology SNAFU: RESURRECTION. This is a novella with the characters GRIFFIN & PRICE, marking their fourth time in a long fiction piece of work. There will be more. :)