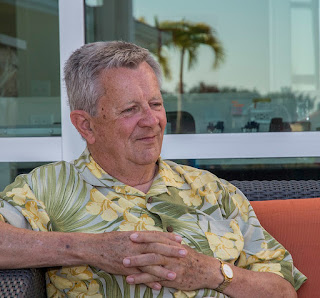 On December 15, eight panicked phone calls and two text messages told me my father had suffered a stroke and was in the hospital. Without surgery, he wouldn't survive, yet the surgeon had to wait 48 hours past the stroke before operating, or Dad would die on the operating table. Then, the day before surgery was scheduled, Dad suffered a much bigger stroke. One that brought the entire ward staff at a sprint.

At 9PM that night, they said, 'emergency surgery.' Dad's vascular surgeon raced to the hospital and shouted down that notion. We had to wait another 48 hours for the most recent stroke lesion to heal a bit. Finally, late Friday night, 12/21, Dad had his life-saving surgery.

When Mom and I went to see him in recovery, afterwards, it was very clear from his reaction that he had not expected to wake up from this one. Not ever.

On Christmas Day, ten days after the first stroke, my father walked (because the hospital couldn't find a wheelchair) out of the hospital under his own power and went home with no appreciable deficit from either stroke event.

So here's the recipe for joy:

It's been a strange and miraculous season for us. No matter whether you drink alcohol, or prefer tea (call Miro Tea in Seattle and order up a few ounces of Phoenix Dan Cong), I hope your celebrations have been filled with light and love and second (or third) chances.