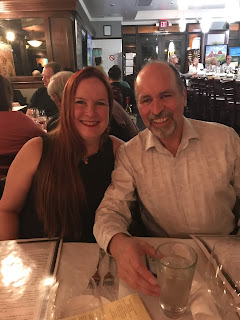 Happy St. Patrick's Day! David and I are both from Irish families. You can see it in those smiling eyes, yes?

Our topic at the SFF Seven this week is "I don't think so. Name a piece of writing advice you do not agree with and explain why."

Some of you might be able to guess which bit of advice I'm going to say. It's been on my mind lately and I've mentioned it often enough that I already have a tag/label for it.

It's this one: "If You're Bored Your Readers Will Be Too."

When I've posted about this before (Looks like I did nearly a year ago, so that's not TOO recent), people have argued with me. "People" meaning other writers. They contend that they must FEEL the feels in the story or their readers won't. I can't argue with anyone else's process - the First Rule of Being a Writer is Own Your Process - but I don't think the writing experience should be conflated with the reading experience.

The two are VERY different. In the most basic sense, reading is faster than writing. I suspect if we did a cage match of the slowest reader with the fastest writer, the reader would still prevail. Also, absorbing a story is different than creating one. Finally, "boredom" is a relative term.

I'm going to focus on this last one.

Anyone who's been a parent, or spent any time around kids, is familiar with the "I'm so boorrrrred" complaint. It's usually ill-timed, delivered when the adult is working hard on some necessary but unexciting task of their own.

Merriam-Webster - the dictionary with the most politically on-point Twitter feed of its ilk - defines boredom as the state of being weary and restless through lack of interest. That "weary and restless" part is what makes the complaint from kids irritating. They're expressing a restlessness of youth, and the weariness is mostly emotional. The usual temptation is suggest various household chores to absorb their energy, but we all know that doesn't answer the complaint.

What they need to do is solve their own problem, and find something to invest their energy into.

See how these are two totally different problems?

That's why I think it's terrible advice. If the writer is bored, they need to work through it, knowing that feeling restless with the slow pace of writing is part of the process. If you're worried about the readers being bored, then you need to look at other factors, like plot, pacing, emotions, investment in the characters, and so forth.

Email ThisBlogThis!Share to TwitterShare to FacebookShare to Pinterest
Labels: "If You're Bored Your Readers Will Be Too", bad writing advice, bricks, David, Irish, Jeffe Kennedy, own your process, St. Patrick's Day, writing advice