My Adjectival Mantra for First Drafts

Topic: First drafts, and the adjectives we'd choose to describe them.

UGLY. I tell myself this all the time when working on a first draft, as in “First drafts are meant to be ugly.” I don’t have to have perfect prose. If there’s obviously a scene missing or some piece of action I don’t feel inspired to write that particular day, it’s OKAY. I can keep forging ahead in the story and trust my Muse to supply the missing pieces later. This little mantra is very useful to prevent “paralysis by perfectionism.” I remember when I started writing, back in junior high school (we’re not counting the fairy tale I wrote at age 7) being surprised that the books didn’t flow perfectly and beautifully from my pen onto the paper. Ha! I had a lot to learn…
So when I use this word, I’m not being pejorative. I’m encouraging myself not to be daunted.

Satisfying. I’ve had this story and these characters bottled up inside my brain long enough and now it’s time to let them fly. Or teleport. Or drive the chariot. They’re on their way to the wider world of readers, even if not there just yet.

Unpolished. This isn’t the same as ugly. This is acknowledging to myself that right now I’ve used the word ‘that’ probably a zillion times and ‘very’ another zillion and so forth. There will be a process later of cleaning out those words and other problems, including ascribing emotions and stage business to all those talking head dialog situations. It’s a considered process and part of my pre-publication ritual, often included alongside dealing with the inputs from my editor. The main point at first draft stage is to not stem the flow of creativity worrying if I’m using the word ‘that’ too many times. I am. It’s a given. But it won’t be in the final draft.

I released a box set in the last week, the first three books in my award winning Badari Warriors series, all of which were ugly but satisfying, unpolished first drafts at some point! 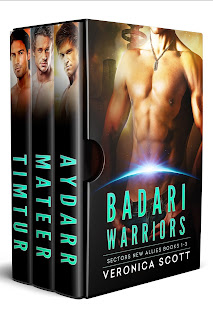 Ta Da! There’s no new material included, other than a brief recap of why I wrote each book (which appeared in previous blog posts) But I thought it was time to put the books together!

This Badari Warriors box set gathers the first three science fiction romance novels from this award winning series into one collection. Featuring genetically engineered soldiers of the far future, the Badari were created by alien enemies to fight humans. But then the scientists kidnapped an entire human colony from the Sectors to use as subjects in twisted experiments…the Badari and the humans made common cause, rebelled and escaped the labs. Now they live side by side in a sanctuary valley protected by a powerful Artificial Intelligence, and wage unceasing war on the aliens.
Amazon     Apple Books     Kobo     Nook