My Levels Are Not Your Levels

This week’s topic:  "People always say they want to take their writing to the next level. Well, what are the levels, as you see them?"

Do people always say this?
Well, ok then…

Far be it from me to try to define levels for anyone but myself. Each author’s path is different, in my opinion, based on what they write, what they prioritize and care about, what they want to give their readers, their own goals, events happening in their real lives…so what I might think in terms of my own writing career is only applicable to me.

In the past, in 2010 I made a conscious effort to get a much better grasp on the craft itself (i.e. not ‘just’ be an unpublished storyteller who scribbled the story once and didn't edit or revise) and learn not to head hop, not to tell vs show, not to rely on lazy words (adverbs ending in –ly or the word ‘that’) etc. The result of that was my first published book, which sold in 2011.

Then I concentrated on getting another book released, this time as an independently published author, which required me to learn some new skills on the business side (getting a cover, having the formatting done, uploading to ebook seller sites, navigating production of a paperback and an audiobook…)

Simultaneously I was working on learning to write the second book in a connected series, not just standalones.

At that early stage of my career, I thought I could never write an actual SERIES, with the same characters recurring and advancing a series plot arc. I was in total awe of people who could do that. (Well, I still am! Jeffe, Nalini, Ilona…there are some authors who do it so well and with such richness of plot and world building…) As one who is pretty much a total pantster, I believed it was beyond me to do such a thing and keep my Muse interested in writing the books, because if I plan out a book too much in advance, the Muse clams up, dusts off her hands and says “We’re done with that book.” So how was I ever going to keep a series moving forward? 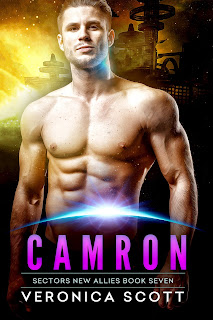 Well, now I’ve done that, with my award winning Badari Warriors scifi romance series (released the 8th book, more on that below)…

So my next self-challenge is to start a new series at the same time I’m continuing to write the Badari Warriors.

I don’t really know what other ‘levels’ I might want to tackle someday. I guess I’ll wait and see!

I just released CAMRON and here’s the blurb:
Dr. Gemma Madarian is far from her home in the human Sectors, kidnapped along with hundreds of other humans to be used for horrifying experiments conducted on a remote planet by alien scientists.

She and another prisoner, Camron of the Badari, are the only survivors of a deadly crash landing. She’s paired up with the genetically engineered soldier by their mutual enemies and sent fleeing through rough country, hunted for pleasure by an enemy officer and his ferocious trackers.

The enemy wants a triumphant kill. Gemma and Camron want to survive.
Camron never dreamt of having a mate but Gemma shatters his preconceptions and makes him desperate to do everything in his power to save her life and claim her for his.

There’s no help or refuge to be had in the desert where they’re fleeing for their lives.

Will Camron and Gemma live to fight another day and explore the growing attraction between them, or will ancient secrets and bitter rivalries end their bid for freedom?

This is the eighth book in the Badari Warriors world (and the seventh book in the numbered series) and each novel has a satisfying Happy for Now ending for the hero and heroine, not a cliffhanger. Some overarching issues do remain unresolved in each book since this is an ongoing series but romance always wins the day in my novels!
BADARI WARRIORS Timeline:
AYDARR
MATEER
TIMTUR
JADRIAN
DARIK
GABE
KIERCE
CAMRON