I'll take fantasy murder, please. With a side of pasta sauce. 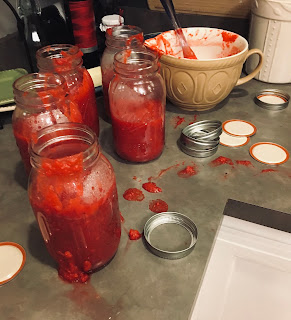 (the closest I've been to a murder scene off-page:
my attempt at jarring homemade pasta sauce without a funnel)

No matter what genre you read or write, there’s murder lurking there. Murder’s been around since Cain and Able, and ever since then people have been talking about it.

But what do I consider the most intriguing fictitious murder method? Hmm…I guess it depends on the genre!

In my sci-fi thriller, The Mars Strain, there’s a world-wide pandemic that takes people out by the thousands. *cringe* I do love viruses, still can't take the lab outta the girl, but a little too close to home for you at the moment?

Fantasy! I also write fantasy and in them there’s:

Magic. That’s my answer and I’m sticking to it!

In both of my fantasy books magic in inherent, if a character has fae blood in their ancestry then they have some amount of power. In The Dark Queen’s Daughter my MC’s power allows her to tap into the magic of the world and use it for brief moments. So she’s able to control the trees and crushes revenants back into dust and stabs a draugr, though they regenerate up to three times so different methods are required.

Magical murder can range from gristly to the soul passing on a sigh. I appreciate that it’s fantastical in nature and therefore has a certain distance to it. Because when it comes down to it, I’d rather write about magic’s glitter and healing properties. Still, when I want to do good evil is right there with me, so murder will keep worming it’s way into my stories. In one form or another.

Do you have a favorite book-murder, magical or not?