How to cheat yourself out of a difficult scene/writer's block. 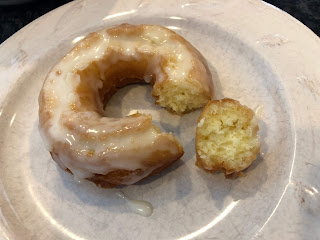 This week we’re talking about the most difficult scene we’ve ever written. And I really don’t want to talk about it because I don’t have the mental capacity to unbox that at the moment. So, I’m going to cheat!

Cheating’s fun! We do it all the time! That donut in the break room, the extra coffee even though we’ve already had a whole pot, staying up till the wee hours of the morning to finish that Netflix series or book. We cheat in life.

*This is for those times you’re simply stuck: can’t think of what to write, can’t figure out how to get your characters from point A to point B, can’t get the words on the page.

Are you wondering how to cheat at writing? It’s as easy as reaching for that glazed old-fashioned. Simply fill in a sentence or two, or however many it takes, to warp-speed you to the next scene that formulates in your head or the next plot point in your summary.

YMMV, but when I’m stuck with writer’s block I just need to find a way past that sticky point because my brain is what’s stuck on that scene, those details that don’t fit, or that plot hole that I can’t see yet but my subconscious knows is there.

By cheating, I give my brain a pass to move on and return to production state. By cheating, I’m giving myself a bandaid that will eventually fall off, because those dang things never stay on long enough, but by the time it slips free it’s usually because I’ve found the source of the plot hole or character inconsistency and fixed it. By cheating, I take away the stress. Did you get that? It takes away the stress which is the biggest road block of anything, mentally and physically. Get rid of the stress and everything opens up.

An example? I was writing THE MARS STRAIN and my MC, Juliet, had to end up at the CDC with the Martian virus. But!!! I didn’t know how to get her there. Stuck. Stuck. Stuck. I wasted a month staring at my computer screen, trying to write and ending up with a handful of words or some nifty new adjectives.

Then, I decided to glaze over the details on how she got to Atlanta and focus on what she’d be feeling when she got there. So I wrote, and Juliet had a breakdown, a full-on sob fest breakdown from the stress of fighting the Strain, losing her best friend, and possibly losing the man she loves. And then I knew exactly what had to happen before she reached the CDC!

Game over writer’s block! I’d broken through and all it took was a little cheating.

Go ahead! Give it a try! Reach for that cake donut, toss a couple glaze-over-sentences in that WIP and move on!

(Which totally has me craving one right now…I’m going to have to convince my wonderful, amazing husband that it’s time to whip up a batch. Since I can’t eat store bought ones the only donuts I get are his made with organic heritage wheat. Jon, you’ve been warned!)