Much as I like to respect the topic of the week here at SFF7, this week I just can’t. It’s something about methods of murder. Well (a) I don’t write murder in my books – characters die in the course of the plots but that leads to (b) I am TOTALLY not in the mood to discuss death this week. Enough of that grim stuff going on in the real world right now, thank you. And to be fair, we here at SFF7 develop a list of 52 blog topics months in advance and then it’s fixed on the calendar for the year ahead, so I don’t mean to sound critical of whichever member proposed the one for this week.

One thing we’ve all got too much of on our hands right now is time and we’re looking for diversion. Well, at least I am! So it’s a good time to binge watch series and movies, and to work through that To Be Read stack of books. In the spirit of honoring the weekly topic AND doing something at least a little bit useful (I hope) as an author in the current situation, let me offer some mystery diversions.

The classic TV show would have to be “Murder She Wrote,” with Angela Lansbury. The series ran twelve seasons, 1984 through 1996 and also included four movies. I did a quick Google search and it can be found in various places like Hallmark Channel and on Amazon Prime (a few seasons and only through March 31)… I swear over the course of the show every single movie and TV star of any recognizable stature appeared and it was fun to see them pop up. Of course anywhere the Jessica Fletcher character travelled, murder and genteel mayhem soon followed. I enjoyed the early seasons in Cabot Cove, ME the most but it was probably a good idea to open the plots up more and make her a world traveler.  No offense to Kevin Bacon and his six degrees of separation (I myself have two degrees of separation from him) but I think Angela Lansbury/Jessica Fletcher met everyone in Hollywood  in those twelve years.

A recent murder mystery movie with rave reviews is "Knives Out," which is in my queue to watch soon.

My personal all-time favorite mystery novel series is the Chronicles of Brother Cadfael by Ellis Peters, set in England in the first half of the 12th century. The author created a full and complete world that I happily went to live in (and I frankly don’t want to know if there are historical inaccuracies or anything else because I love those books…not saying there ARE because I frankly have no idea and am not an expert on the 1100’s in England.) You might think stories about a monk wouldn’t be all that adventure and action filled. Fortunately he’s an ex-Crusader and a bit rebellious, within limits and there’s a wonderful supporting cast that grows along with him as the books take us through the years. St. Peter’s Fair and The Sanctuary Sparrow are two of my favorites.

Of course when I was young I read Nancy Drew, Trixie Belden and more. At a somewhat older phase I went through a spell of reading all the Ellery Queen and Nero Wolfe mysteries, Sherlock Holmes, Agatha Christie, Sue Grafton, Diane Mott Davidson, Ed McBain’s 87th Precinct books…I don’t know, I almost never read mysteries anymore but for a while I was really immersed in them. Of course being a full time author now does cut into my reading! 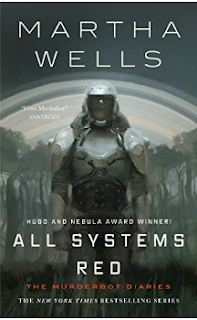 Despite the title the Murderbot Diaries by New York Times and USA Today Best Selling author Martha Wells, the science fiction series isn’t precisely a classic mystery but is wonderful and the title character is out to solve and resolve some weighty interstellar issues. I highly recommend these books.

Confession time: I’ve never read any of the Eve Dallas scifi detective series written by New York Times and USA Today Best Selling author Nora Roberts. I know so many people who never can get enough of her books under any pen name and this particular series is hugely beloved. Set in the mid 21st century, mostly in futuristic New York but also occasionally going off the planet, there’s also a focus on the romantic relationship between Eve and her husband. Hmmm, maybe I should give this series a try again, probably with the first book, Naked in Death.

Famed science fiction author Isaac Asimov also wrote mysteries, including Caves of Steel (The Robot Series Book 1), dealing with a New York City Detective and an android who have to learn to work together. 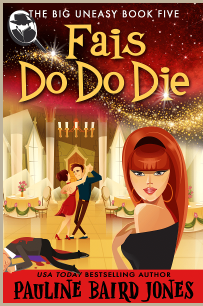 USA Today Best Selling science fiction romance author Pauline B. Jones also writes a mystery series set in New Orleans, The Big Uneasy series. Ms. Jones is a former resident of NOLA and her ability to transport you to the city in her novels is part of the allure for me. She’s very good at devising intricate plots and infusing moments of humor.  The latest book in the series is Fais Do Do Die about a caterer and a disgraced SWAT team member and here’s the book’s teaser: He kicks down doors, and she serves hors d’oeuvres. And the Big Uneasy delivers them both a huge helping of high stakes danger—and a chance at romance.

SFR author S. J. Pajonas has the Miso Cozy Mysteries series set in Japan, which I thoroughly enjoy. I love the way this genre can transport the reader to an entirely different place or time and Ms. Pajonas’s books don’t disappoint. Here’s how the author describes her first book and the series: The Daydreamer Detective is the savory starter to the Miso Cozy series of cozy mystery novels. If you like twisty plots, delectable food descriptions, and rural Japanese towns, then you’ll love S.J. Pajonas’ culinary tale.

Since I’m not trying to do any kind of exhaustive survey of the literature here, merely to present some brain teasing reading material to help divert socially distancing readers in these trying times, I’ll finish with a few more entries in the cozy mystery genre, only these come with a paranormal twist. I haven’t read any of these myself, but the authors are very well regarded in their niche and are consistent best sellers in the category. And if you enjoy the books, there are many more in each series to choose from. 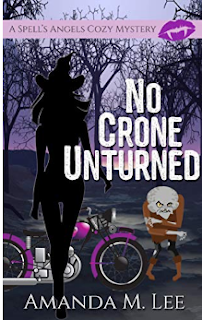 Amanda M. Lee is HUGE in this genre and has a number of series going as well, including Spell’s Angels, Moonstone Bay, Charlie Rhodes, Wicked Witches of the Midwest…her latest was No Crone Unturned (A Spell’s Angels Cozy Mystery Book 3) and here’s the beginning of the blurb to give you a flavor of the offerings: Scout Randall is on the verge of getting information about her past. Patience has never been one of her virtues, though. As she’s waiting for her source to get settled, a new problem arises … and it has fangs.
When she was a kid, a chance encounter in a park left Scout questioning the existence of monsters. Now, one of those potential monsters is back … and he’s taken up residence in Hawthorne Hollow. He isn’t alone either.
Vampires are on the prowl and it’s up to the Spell’s Angels to figure out what they want and eradicate them through any means necessary…

CC Dragon is another well-established author in the cozy paranormal genre and her latest is A Nursery, A Necromancer, and a New Chapter: Deanna Oscar Paranormal Mysteries Book 13 (Deanna Oscar Paranormal Mystery).  The blurb: The house is clean and safe for the newest member of the Oscar family…but when a necromancer starts circling the mansion, Deanna knows she must empower a new team while she tackles the challenges of motherhood. She’ll supervise and help but one way or another, she’s taking a break and this is her last case while her little one is vulnerable. Passing the baton isn’t easy but the legacy of Oscars in New Orleans must go on.

I’m sure I’m missing any number of mysteries and mystery series that are much beloved so please feel free to share your favorites with us in the comments!