Ch-ch-changing. Titles and names, that is. 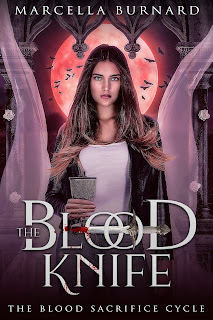 First and foremost, I have a new book out. It's The Blood Knife, the vampire novel that had been in a box set for three weeks. That fundraising promo is over and I've put the book up as a standalone. It'll go up in formats other than Kindle this weekend.


Ch-ch-changing.
Title and name changes. You knew I'd have a story about that. When I subbed my first book to Berkley, it went in as Enemy Within. Marketing didn't like that title. So, they asked for a name change. I wasn't thrilled, but I was eager to play nicely with the big kids. So I sent in a list of twenty possible other titles. Many blessings upon my ever-patient critique group(s) who helped brainstorm those, cause I was stuck after about five. Titles are so not my super power. Anyway, I sent the list. Marketing brought their own list. Not a single one of them stuck. After a week of wrangling, marketing went back to the editor and said, "Leave it." You know the rest. The book went out with the original title. I'd have loved to have been a fly on the wall at that marketing meeting. I really would. It would have been fascinating to hear what criteria made a good title versus a bad one. With that information, I might could have given them a better title option, but alas. I was not invited.

The only change that DID happen was in the name of the aliens in the book. The major bad guys are the Chekydran. Well. That's what they *became* because when I first conceived of them, their name had far fewer vowels. My point at the time was that not every species humans and humanoids ever encounter are going to have names that we can say. My agent at the time, who convinced me to buy a few vowels, argued that it didn't matter humans and humanoids were always going to name aliens something they could say, so I might as well throw my poor readers a bone and make the Chekydran readable. I'm glad I did. I can't even remember, now, how I had them spelled originally. So it clearly didn't matter.

Frankly, if I need to change a name, that gets caught in draft when my critique group catches that all of my character names start with the same letter of the alphabet or something. I've been lucky thus far. Editors haven't asked me to change anything I feel really strongly about. I expect that's just a matter of time, though.