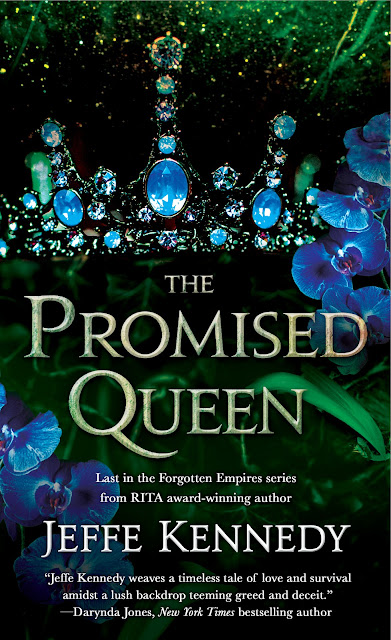 THE PROMISED QUEEN has a cover! I just love how those jewel colors pop off the screen. This is book three in the Forgotten Empires trilogy, out May 25, 2021. But you can preorder now!

Our topic at the SFF Seven this week is all about those Plot Bunnies: How/where do you corral them? How much room do you give them to grow?

For those unfamiliar with the term, a "plot bunny" is an idea that catches a writer's attention and imagination, but isn't what they're intending to focus on right then. I did a bit of (very causal, not all thorough research) and found this definition: From the metaphorical image of the writer's brain producing ideas with the abundance and speed with which rabbits are fabled to breed. There's also this: the term is thought to be related to the oft-quoted John Steinbeck quote about ideas and rabbits.

The Steinbeck quote is: “Ideas are like rabbits. You get a couple and learn how to handle them, and pretty soon you have a dozen.”

That makes some sense, although I'd point out that the Steinbeck quote treats the cultivation of ideas as a positive where most writers seem to use the term "plot bunny" as a non-productive distraction.

I'd always associated the term with Alice chasing the white rabbit down its hole and ending up in Wonderland, the source of our metaphor "going down the rabbit hole." You chase the plot bunny and you end up in a place where you've left your project - possibly with deadlines - behind and pretty soon you're talking to caterpillars and having tea with insane creatures.

I'm not really a fan of plot bunnies.

But you all know me: I'm not a fan of anything that interferes with getting a book written.

So, I treat plot bunnies as what they are to me: distractions and procrastination bait.

Writing is difficult. Writing novels in particular requires focused concentration on a single story over a long period of time. It's the nature of our minds to look for ways out of that difficult work. It's also the nature of the universe to test our resolve. I look on plot bunnies as challenges to the work. If a plot bunny is the universe's way of asking if I *really* am determined to write that book, then my answer is not to chase the bunny down the rabbit hole.

Sometimes I jot down the idea. Mostly I just it run away. If it's a good one, it'll come back.