Our topic this week is to name our favorite SF&F tropes.

Well okay, I neither read nor write in terms of tropes. By which I mean I don’t search out books in specific niches like the bully’s best friend’s sister expelled from her academy solving a cozy mystery on Mars, to make up a wild example. I read a book if the plot sounds interesting to me and I write a book if there’s a story I want to tell.

Now most of my science fiction novels do fall into the classic SF trope of military man (or ex-military man) and strong woman heroine plunged into a dire situation, which they have to work together to survive or to solve and along the way respect and romance happens. For my Badari Warriors series, I deliberately picked the trope of genetically engineered beings, because I do love series with that as a central theme and I wanted to write one. So I guess technically you could say that’s a trope I enjoy and I write, but I don’t do searches in Amazon form my next new read based on books in that category. If I see one that sounds interesting, I might one click it. Or I might not.

And with my Badari, I put many other elements into the plot and the world building so there are various aspects to the plot.

They do have fated mates, however, which again isn’t a trope I necessarily search out to read. I just happened to think it made a nice twist in this particular series.
But rather than be totally meh here today, let me share three top tropes in science fiction romance that I am seeing strong reader interest and appetite for. 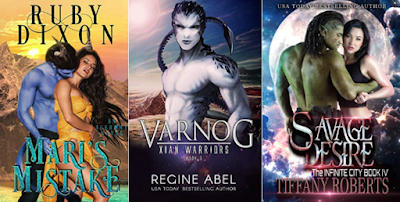 ALIEN ABDUCTION remains huge. I can’t tell you how many books I see each week that start out with some variation on the phrase “I’ve been kidnapped by aliens.” Usually the woman is destined for a dire fate until she meets a strong male – a gladiator, an alien commander, another prisoner (usually of an alien race), a soldier or mercenary with a conscience (or her fated mate maybe) who bonds with her and fights for her. There’s infinite variety in these stories as SFR authors have vivid imaginations and storytelling skills and the books span a wide range from extremely steamy to more tame. Alana Khan, Athena Storm, Ruby Dixon, Regine Abel, Kate Rudolph, Tiffany Roberts and many other authors have written this type of story. 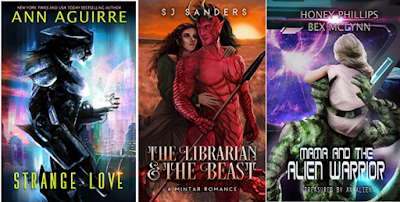 ALIEN PROTAGONISTS WHO LOOK LIKE ALIENS. There are entire groups on Facebook dedicated to this trope and much discussion of this. A truly alien hero offers all kinds of possibilities for…ahem…interesting bedroom scenes with tails, tentacles and other physical gifts coming into play. I have to say this isn’t a variation I personally read much but I have enjoyed a few. S. J. Sanders, Tiffany Roberts (again), Ann Aguirre (her recent novel  Strange Love was so well done I had to enjoy it!), Honey Phillips, Amanda Milo, Auryn Hadley and others write using this trope. 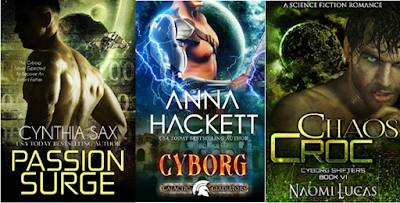 CYBORGS are still and always hugely popular. The idea of heroes who are part human and part machine, whether it be actual metal parts, or nanocytes or some other method of enhancement, falling in love with a human woman just really works for readers.  Cynthia Sax is my go-to author for this because I do enjoy a good cyborg romance and she writes them so well, but Anna Hackett wrote my all-time favorite entitled Cyborg: Galactic Gladiators Book 10. Laurann Dohner is another author who has a top selling cyborg series. Naomi Lucas, Mina Carter, Grace Goodwin, Cara Bristol and others write excellent cyborg novels.

It should also be noted that, like me, SFR authors may bring many different tropes into play in one book - an alien looking alien who's a cyborg and kidnapped a human woman, for example.

I’m sure in each of these three categories I’m missing a chance to highlight many other authors but I’m just taking the ones on the top of my mind for today. That’s enough SFR tropes for one quick post – next time we tackle this topic on SFF7, I’ll be sure to give you some others for your reading pleasure. 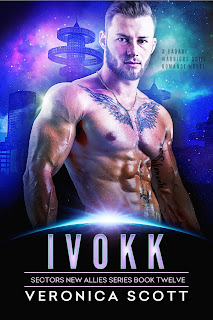 Here was my most recent release in the award winning Badari Warriors series:


Proud enforcer of the Badari South Seas pack, Ivokk undertakes a secret mission back to their former home, in search of a cure for a mysterious illness affecting his soldiers, now in exile in the north. He’s ready to make any sacrifice to find the answer and help his pack brothers stay strong. He’s even willing to accept responsibility for the human woman assigned to the mission, although she’s a headstrong civilian, difficult and rumored to dislike his kind.
Sandara DiFerria was once a three star chef in the Sectors, but that was before the alien enemy kidnapped the entire adult population of her colony to use for experimentation. Rescued from the labs by the Badari, she does her part to support the rebellion now by running the vast commissary operation in Sanctuary Valley. All she asks is to be left alone until she can get back to the Sectors and pick up her old life again. Her one previous romantic brush with a Badari soldier turned out badly, ending in public humiliation. Add to that post-traumatic stress from her life before moving to the colony and she’s the last person to pick for a top secret mission. Or so she believes.
The Alpha running the pack disagrees and sends her to do the job under Ivokk’s watchful eye. Thrown together by the nature of the task they must undertake, the undeniable attraction they both feel grows. Will the dark secrets of Sandara’s hidden past create an insurmountable barrier between them? Can Ivokk and the tempestuous human chef find the answer to the Badari illness in time? Or will the elements and the enemy bring disaster?
Amazon      Apple Books      Kobo      Nook      Google Play