Snow is falling and so must the old cosmic moat surrounding the Mid Worlds in the latest installment of The Immortal Spy series. Yep, that's right, Bix and the Berserkers are back, trudging through the ick of winter on another mission to save the Mids. 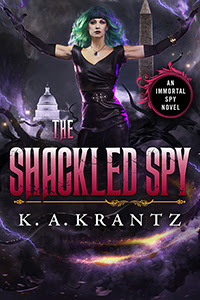 THE SHACKLED SPY
The Immortal Spy: Book 6
Sometimes the strongest chains are the ones we craft for ourselves.

The Mid World defense system is finally ready to launch, but the millennia-old barrier of highly destructive ether must be removed first. Only one very special artifact can hold such a powerful force. To take down the old and make way for the new, Bix and her team race to locate and reassemble the pieces of the containment device scattered across the Mids.

Alas, they’re not the only ones searching for the shards. In the wrong hands, the fragments are weapons of mass destruction. Fearful magical races and fearsome deities alike scramble to claim the pieces, but lurking in the ether are entities who will not go quietly…and who will stop at nothing to keep Bix from interfering in the burgeoning war.

Darkness will fall and armies perish when manacles break from the shackled spy.