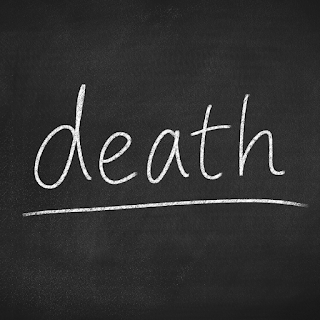 This week's topic is: The Necessity of Death: Do you have to kill characters for there to be enough risk? What other threats work better/just as effectively?

First, let me say that I don't preach many rules in fiction. I think writers should hone their craft (meaning you should know how to wield your writerly tools such as grammar, structure, concept, etc., and everything should be done on purpose, down to word choice). But everything else? The cans/cannots? I don't go there because a deft writer can make something that's been labeled a no-no a work of art. It doesn't necessarily mean everyone will like it, but it also doesn't mean you can't do it. I have three beautiful doggies, and I can invariably say that I don't want to read or watch anything about dog death. And yet I watched a movie where a puppy's death in the first ten minutes motivated the main character to hunt down his enemy, and I cheered for him all the while.

Why? Because that death mattered. This is really the only rule I'll preach on this topic. I think I've said before on this blog that it's good to make things personal, and death as a motivator is as personal as it gets. The threat of death makes characters act, as can a death itself. It can send a whole series of events into motion because, ultimately, most of us want to live, and we want those we love to live. We want innocents to live. Having that desire/need tested shows us what our characters are made of. It shows their mettle and morals, how much they'll bend those morals to get revenge or set things to rights. It shows us their determination, mental state, grit, and their inner landscape of turmoil, regrets, and hopes. Death is so deeply felt, and as long as it resonates within your character/s, I like to think that, chances are, it isn't a wasted moment on the page.

But are there other options for risk/stakes? Of course. A gazillion. Threaten someone's freedom and see what they do. Threaten to take their memory. The sight or hands or... the creativity of an artist. The voice of someone whose voice is everything. Destroy the only possible route out of a dystopic city where a character, alone, is trapped. Give them plenty of food. They can live. But there's no one else left. They're faced with a very desolate future.

All sorts of things can be used to drive and test our characters. Death is only one choice. But if it matters to the writer, chances are it will filter into their writing and hopefully matter to the reader.