This week the subject is whatever strikes our fancy, so I'll just put this out there. You're (probably) n0t wrong. When it comes to your method of writing, I mean. There is no right or wrong unless you're not doing it.

Want to outline the liv8ng hell out of it: By all means. Want to take a chance and pants it? certainly, as long as you're actually doing the writing. I'm sure I've brought her u before, but once upon a time fellow barista working at Starbucks alongside me proudly announced that she was a writer. She would come into the store where we both worked and she 2wouod pull out her laptop, set it up, order a drink, sit down to write, and promptly pick up her phone, where she would spend the next 90minutes to two hours, chatting away. Then she would close up her laptop and head home to her husband and kids.

To my knowledge, she never finished a single project. We worked together for over 2 years. In that same time, I wrote no less than three novels and a dozen short stories. All of them got published. You want to know what the difference is? I actually WROTE when I was writing. She might have incredible tales to tell, but I never saw her actually write one. Ever.

She rolled her eyes every time I pointed that out to her. She couldn't understand how I was so productive. I told her not to answer the phone when it rang unless it was her kids. I also suggested telling her kids (the youngest was, I believe, fourteen) not to call unless it was urgent.

She's not a writer. She's a dreamer. There's a difference.

If you want to be a writer, WRITE.

End of rant. Go get some writing done..

Oh, and this year? One novel finished. One novel started. One novel in the process of being plotted. Three short stories sold. One novella sold. One collaborative novel half-finished. It's my chosen profession. It's what I do. 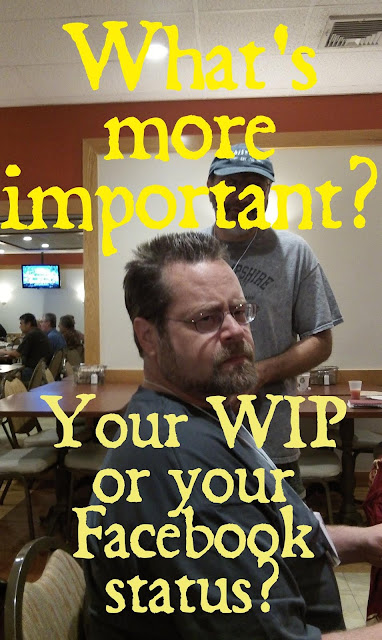