The Death of a Character

Every living thing in this universe shares at least one thing in common. We will all die. Most of us likely heard 'death is part of life' or 'death is a fact of life' as we were growing up. Most of us have been touched by the deaths of loved ones.

So when someone asks if it's absolutely necessary for characters to die in my novels, the answer is 'of course'. But.

Anyone I kill off in a story must die for cause. The death(s) need to mean something to the characters left behind, or they need to augment reality. Any time you're writing military SFR, if people aren't dying when you shoot at them, you're writing parody. You need to apply a cost to everything characters do. Or don't do. You need consequences.

Sure, I can make the consequences impact the character directly, but consider the psychological impact of your poor decision destroying an innocent's life. That's some heavy guilt and it's hard to get rid of. Am I fond of fridging girlfriends, boyfriends, or anyone else? I'd like to say no, but I have a lot of dead people who are driving a hero in the current WIP. I think that's the textbook definition of 'fridging'. That sucks. I didn't want to be that author. Forth book in a series, tho. So it's not like I can change it now or make it somehow okay. I don't want it to be okay. I want it to be raw. And hard. And haunting.

Anyway. We're off track. Death must mean something. If it doesn't, then killing off a character becomes a toss off. These are the character deaths in books, TV, and movies where a writer just kills the character. It's almost an accident. Oops. I dodged when I should have parried and now I'm dead. I understand that this is, in fact, reality. All too well I know this. But you know who handles what could have been a toss off death so adeptly that it carried a boat load of weight and emotion? Peter Jackson. Lord of the Rings. Battle of Helm's Deep. The elf Haldir leads a troop to bolster the defenders. Heroic! Hopeful, even.

Then Haldir takes an enemy arrow between the eyes while defending the battlements. It's almost accidental (and never happened in the books). It's a brilliant piece of theater - a full few seconds to watch realization cross his face, then that face go slack, and the slow motion fall. It's also amazing emotional manipulation - just as the audience is cheering the heroic elves riding to the rescue, they're toppled from their emotional perch by the arrow of Haldir's death. I totally see why Peter Jackson put it in the film when it isn't in the books.

The hero. Fallen. Lovely imagery. Sledgehammer of 'aw, man, I liked him'.

A toss off would have been 'Hey! Hero riding in with reinforcements! Oops. He's dead. Oh well.' It would have been a quick pan. Or someone who deserved a better, weightier death accidentally falling through a magic mirror. Not that I'm mentioning names of authors or books here.

And now, a bit of new life. The monarch caterpillar I brought in to save from the red wasps cocooned in a nursery on my front porch. It emerged and flew off into the world on Tuesday. 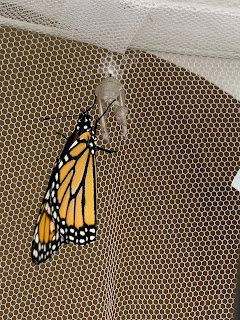