Protagonists and The Promised Queen 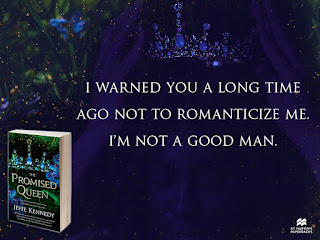 Our topic at the SFF Seven this week is "Avoiding Same Protagonist, Different Name, Different Story: How do ensure your lead characters are unique per series/standalone?"
This isn't a great topic for me because I ... don't. In that, I don't ensure or strategize this kind of thing. Maybe because I'm an intuitive writer? Characters come to me and tell me about themselves. I don't have to avoid finding the same one any more than I have to worry about running into the same people over and over in the larger world.
But that's cool because it's release week for me!
THE PROMISED QUEEN - book three in the Forgotten Empires - comes out on Tuesday, May 25!

As far as protagonists go, an early reviewer said this to me:
Really appreciate how at no point did Con become some magically articulate prince. He still said "...stuff" instead of somehow finding a way to wax eloquent in the third act. Thank the gods.
I love that! In honor of Con's uneducated and rough ways that have him saying "stuff," here's a scene where he does exactly that.
******************

We walked in quiet for a few steps, Lia turning us at a four way intersection where all the paths looked the same to me. “Do you know where you’re going?” I asked.

“Metaphorically in my life, or literally in this maze?” she replied lightly.

“He has his moments. The answer is yes to both.”

“You know where you’re going in life?”

“That has never been a question for me. My life belongs to Calanthe.” Before I could say anything to that, she continued. “And there’s a pattern to the turns in the maze, which everyone knows, even if they never come this way. The maze is here primarily to prevent anyone from stumbling into the heart of the night court by accident.”

“Am I going to be shocked by what I see?” I blurted out, figuring I’d better ask.

She gave me an assessing look, eyes glowing with color, like the decorative lanterns did. “You might be. Do you mind? We can turn back.”

“No way. Not after I just confessed to regretting not learning what I could when I had the opportunity.” Besides, maybe I’d get some ideas about pleasing Lia. If I could figure out how to be a better lover for her, she might want to marry me again.

“You could still learn, you know,” she offered. “It’s never too late.”

For a pained moment, I thought she’d read that thought—then I realized she meant reading and stuff. “I’d feel like an idiot.” I could just picture it, sitting there like a hulk in some schoolroom, painstakingly reading aloud from a kid’s book.

“You said you feel like an idiot most of the time anyway,” she countered.

“Good point.” We turned twice more, and I began to get the pattern now. “Two lefts, then a right, and repeat?”

“Not that I’d come this way without you.”

“You could. The night court would—”

“I know, I know. You offered this before and I said I didn’t want it. Quit bringing it up.”

“No need to growl, grumpy bear.”

I laughed, a hoarse grating sound. “I thought I was a wolf.”

“It changes, moment to moment,” she replied. “And you’re not, you know.”

“An idiot. You’re a very intelligent man. One of the smartest men I’ve been privileged to meet.”