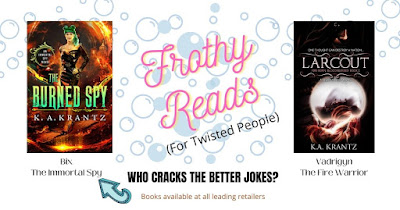 Our topic this week is "Our Frothiest Book."

While I crack jokes aplenty in my books, I don't know that any of them meet the "frothy" threshold. Though, when it comes down to choosing which of my protagonists has a more robust sense of humor, I think Bix, an old AF cosmic entity, leading the Immortal Spy UF series has a bigger funny bone than Vadrigyn, the parasite-wielding fire warrior starring in LARCOUT. It's not that Vadrigyn doesn't find shit amusing, it's just that when she says she's going to slay you, she means that literally...language barriers being what they are and all.

Bix being her charming self:

Tobek held her gaze as he detached his prosthetic arm and handed it off. His expression took on a hint of wariness.

She wagged a finger at the rough puckers of his amputated flesh and whispered loudly, “Where are the alien worms?”

His brows drew together.

She couldn’t stop the snort-giggle. “With that kind of a buildup, I expected some sort of secondary life form. At least a dozen. Maybe purple and covered in mucus? Lots of teeth, no eyes? A regular shortened arm is kind of disappointing, frankly.”

Vadrigyn trying her best to blend in:

Vadrigyn pivoted. Her fist connected squarely with the nose of the closest fool…and punched through the back of his skull. Blood and brain oozed down her wrist and stained her vambrace. The body reduced to sand, leaving her with a skull bracelet.

All progress toward Sana ceased. Silence filled the orchard save for the keening wind. Sana wiped gore from her face then abruptly twisted away, vomiting.

Vadrigyn recited a Morsam litany. Soft blows, barely more than a swat at the air, would suffice to incapacitate a blood-being. She knew that. Gentle. She must be gentle in combat.