Some weeks I think I'm here to be the odd one out amongst the SFF7 when it comes to craft-related topics...wait, that didn't sound right LOL!

But I don't freak out about my writing. It's my story, I'm telling it, it'll turn out the way I want...if I hit a plot roadblock or challenge, I have my proven ways of sitting down and looking at alternatives...

Maybe if I have to find at least one time of semi freak, that would be my first Revise and Resubmit (R&R) letter because I'd never seen one before, there were lots of suggestions (three solid pages as I recall) and what does this all MEAN??? Luckily our Jeffe and several other kindly people talked me off the ledge on that one and I did eventually get the book revised and sold. I'll never see another R&R because I self publish now and I'm not writing one to myself.

Introduce a snake into my environment and I will freak out.

I will also levitate as a result, as proven by the fact that one summer morning when I realized I had just stepped over a six foot rattlesnake, which was now rattling and poised to strike, I found myself safe on the top of a five foot stone wall with no memory of how I got there.

So, moving on, some fun news to share from last week: 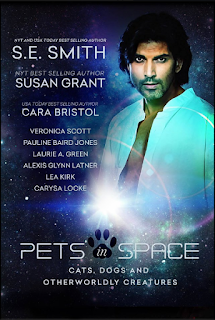 The Pets In Space anthology Pauline B. Jones and I co-created, and for which I wrote 'Star Cruise: Stowaway' was named by the Library Journal as one of 2016's Best Books! (And not to steal her thunder, but applause, please -  Jeffe will have some terrific news of her own on this same topic tomorrow - yay SFF7!) I think I can safely say all nine of us scifi romance authors in Pets were so excited. It was a great group and a fun project.

And yesterday I found out that the Star Trek audiobook "City on the Edge of Forever" was named as one of AudioFile Magazine's Best of 2016! Why does this need to be mentioned here, you may ask? Because yours truly had SEVEN whole words of dialog in that audiobook, playing an Enterprise Crew Member! (I'm know my contribution had no part in the selection of the story as a "Best" - not kidding myself about my non existent thespian skills but hey, I am in the credits on the cd box, I got to autograph the script when I was done recording...) Congratulations to Harlan Ellison, SkyBoat Media and all the wonderful actors who created the audiobook. Thanks for letting me play a teeny tiny part in it, which was this Star Trek fan's thrill of a lifetime (ok and maybe I freaked out a bit, being a Red Shirt...)