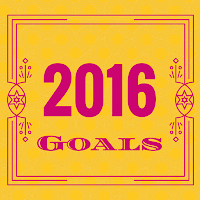 1) Achieve Balance -- This is a lifestyle goal that affects my writing, both in quality and quantity. As a control freak, it is very easy for me to obsess to the point of counter-productivity, even harm. Balance is my go-to word, my mantra reminding me to back out of the weeds and end the vicious cycle. Balance in all things. Mind & Body. Active & Repose. Creative & Analytical. Social & Solitary. Spirituality Without & Within. I've reached that stage in life where it's not about More being More or Less being More, it's about achieving Balance and living joyfully within its fluid state.

EOY: While I'm better at this than I was at the beginning of the year, I didn't come as far as I'd hoped. I'm too much a devotee of sloth and distractions.

2) Write Four Novels -- Three released during the year, one in the throes of professional edits by EOY. As an author-publisher, I can control 90% of the timing of the releases. The catches, however, are goals 3 & 4.

EOY: Oh gods, I really wished had nailed this one. Instead, I completed writing/editing one book (still have to go through the cover art process), have another ready for CP review (one step away from professional edits), and a third chasing its tail in the draft of the first arc. I tracked the had babits that derailed me, so at least I'm wiser on that front. I also learned I can probably do three novels in a year, but not quite four. We'll see if I'm right about me in 2017.

3) Establish More Realistic Estimates for Writing an Editor-Ready Novel -- I'm a slow writer who has yet to establish a baseline of time needed to write a 125k novel.  I've written one in as little as 45 days and another in as long as 7 years. Thanks to the advice of my fellow bordello-mates offered in posts here on the blog, I've a better plan of attack.

EOY: That referenced plan of attack? First casualty of the year. I think I made it to March before it went up in smoke. Mores the pity, because my fellow SFFers are pretty damn smart and very open about their processes.

4) Be in the Black for the P&L of Publishing -- This one I can only somewhat control. Much of it depends on the sales of published book(s). It's one thing to write two, six, or twelve books a year; it is something else entirely to finance the all the bits that come between writing and release day. Owning the costs, of course, is the downside of being an author-publisher.

5) Complete a Reasonable Number of Honey-Dos -- I've a long list of Want To Do, Like To Do, and Need To Do things that take time away from writing, yet are necessary if I want to avoid turning feral. This ties back to the goal of Balance. I won't bore you with details of caulking, decluttering, etc., at least until the end of the year.

EOY: I did well on this one. Perhaps a little too well since I didn't hit the writing goals. Reckon this goes back to Goal #1. Looks like I have another point of balance to strike.


Cheers to Health & Happiness in this new year!

And in 2017. May we all survive the coming apocalypse!