It's Make a Meme week at the SFF Seven!

That's right. The topic is to make a meme of your favorite or least favorite thing about being an author.

For those who don't know, a "meme" is defined by Merriam-Webster (who has one of the best Twitter feeds going right now), as "an idea, behavior, style, or usage that spreads from person to person within a culture." I was interested to learn that the term was coined by Richard Dawkins in 1976 in his groundbreaking book, The Selfish Gene, to discuss genetic inheritance. Had no idea that the "meme" I knew in genetics is the same. In these days of social media, a meme is likely to be some image paired with a caption or tags, to convey a feeling or experience. That's the Jeffe Definition (TM). M-W adds a second definition of "an amusing or interesting picture, video, etc., that is spread widely through the Internet," which I think comes pretty damn close to mine.

Of course, this meant I had to learn how to make a decent meme. Stretching boundaries and all, eh, Veronica Scott? (For the rest of you, I had the best success with https://memegenerator.net/)

I don't often do "least-favorite" or pet-peeve kinds of things, but this one captures my feels this morning. 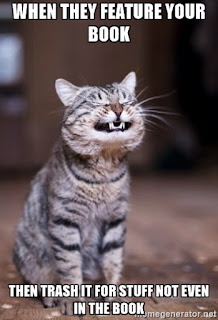