Jake and Keanu the Cat Rule the Writer's Roost

This week we're talking about our pets here at SFF7. I've been a cat person pretty much my entire life. You can see from a few of the books I read as a child, that I'm not kidding! 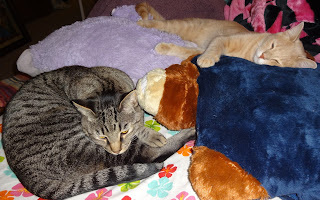 Currently I have Jake and Keanu the cat, both rescue cats I adopted from a local shelter when they were 6-8 months old.. I always have two cats at a time so no one is lonely and they have another feline to play with. When I had the old day job this was more important, since I'd be out of the house so much. They romp and have mock fights and chase each other around, after which a thorough mutual bath appears to be required. 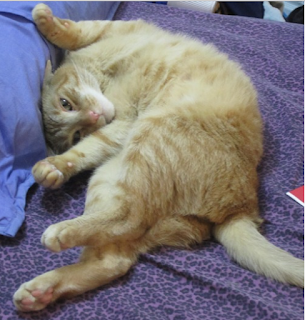 Jake is very laid back most of the time but believes he is a house puma and a predator probably ten times larger than he actually is. He's very playful and regularly distracts me from my writing by bringing me all his toys, one at a time, so I can throw them for him to retrieve. He also enjoys watching me fish items from under the refrigerator, where he of course has placed them. Jake is also a very cuddly cat and will sit on my lap and purr (and demand to be petted) whenever I'm sitting in bed reading or watching TV. He doesn't like the cell phone at all and knows when I'm 'cheating', as in not really paying attention to him. He tries to bite it. 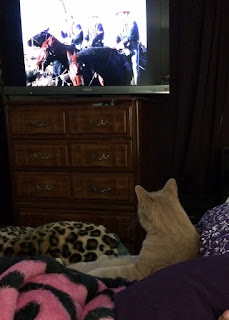 He tends to be quite photogenic (although not as much lately - I think he got tired of the camera) and has been in my twitter feed a LOT. 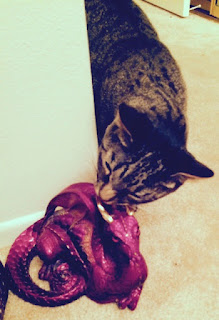 Keanu is more laid back, aloof, doing his own thing, hence the name. We think he had a much rougher time during his life on the streets than Jake did and his tail has a permanent kink from being broken at some point. For a couple of years he never purred and my family's theory was that he never learned, which was sad to contemplate. Then one night I was in bed and I heard this strange rumbling noise and realized it was Keanu! He has a purple hippo pillow on the opposite end of my bed that is HIS, thank you very much, and now he'll knead his claws in the pillow and purr, which is sweet to see. He runs to the door whenever anyone comes to the house, and tries his darnedest to just casually sashay out the door. Where I live there are too many busy streets and too many coyotes to let them try going outside so I can't allow him to make his exit stage left. 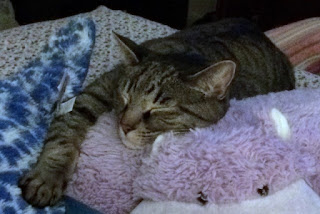 My daughters say he doesn't know "how to cat". He tries, and he wants to be petted and be affectionate but his first response when he's had enough is to try to bite you. No other warning at all. Sadly, I have to keep something of a distance from him because of this, after a trip to the ER caused by a bite (broke the skin, left a small scar but no stitches needed but I'm allergic to all antibiotics) but we have worked out a system where I keep a small table next to my office chair and he knows if he jumps up on that I'll pet him as long as he wants. But I have to keep a very close eye on him the whole time and get up and move if he starts to get too wide eyed or is twitching his tail. Too much "crazy cat" demeanor means a bite attempt is coming. Although the one time he actually did bite me there was NO warning.

Oddly enough, Jake is the dominant cat in the house and eats first, and shoves Keanu off the chair next to my desk, which really is Keanu's favorite place.

Jake also believes he is the reincarnation of an ancient Egyptian cat who belonged to a queen and here's the hieroglyphic proof: 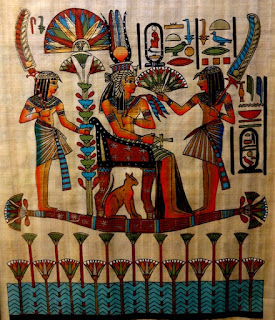 So of course when I wrote my story Star Cruise: Stowaway for the Pets In Space anthology, I wrote a cat (along with an alien pet!). 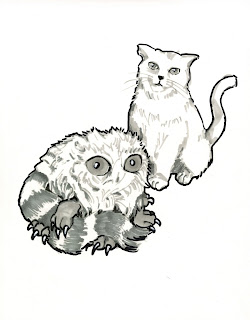