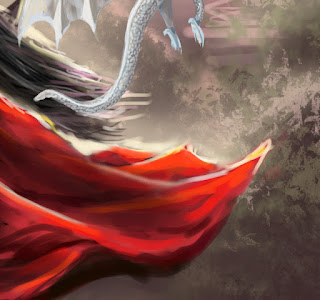 Okay, so... the cover for THE FORESTS OF DRU isn't  *quite* ready, but here's a teaser. You guys, it's so pretty!! The good news is that the book is up for preorder now!! Just at Amazon so far, but the rest will be coming. Release date is January 24 for sure!

Our topic at the SFF Seven this week is: Burning Bridges: Killing Off Characters in Your Fiction As a Plot Point.

I'd lay money down this topic is one of Jim's. The man loves to kill off characters, I tell you.

For me... I don't like to so much. But sometimes it's necessary. A lot of times I fight it, but death in fiction, as in life, is inevitable.

I'm going to talk about my book THE MARK OF THE TALA, the first of The Twelve Kingdoms books. If you haven't read it and don't want a huge spoiler, better stop now.

Okay? All the spoiler-nervous folks fled?

(Not like they couldn't guess from the title, though.)

So, THE MARK OF THE TALA ends with Hugh, the handsome and noble prince who marries Princess Amelia just before the start of the story, dying unexpectedly and brutally. As one guy who read the book said to me, "I can't believe you killed Prince Charming!"

I've quoted him a lot on that, because it does perfectly sum up what happens - and how I also felt about it. As I wrote that book, I fought the dread all along that Hugh would die. There's a recurring premonition where Princess Andi - the heroine of the story - sees Rayfe, the hero, dead in the snow. At the end, fate twists - because Andi changes it - and Hugh dies instead.

It really sucked and I cried over it.

But... Prince Charming had to die. While these books do end with Happily Ever Afters, as in life, those are only for some people. Others are passing through stages of grief and loss. This series, and the continuing saga in The Uncharted Realms are all in a way about loss of innocence. Or, at least, the loss of comforting illusions. Each heroine discovers the world isn't what she thought it was. The truth she discovers is often better in ways - certainly better for her - but each much shed the old beliefs of childhood to move forward.

For all of us, that means putting Prince Charming in the grave.

Because the idea of Prince Charming is one of the most profound illusions we're told. As an archetype he borders on ridiculous - forever riding about on his white charger, hair gleaming gold in the sun and noble visage in handsome profile. He is without flaw and utterly... dull. In THE MARK OF THE TALA, Hugh's essential flaw emerges in that his nobility blinds him. He can't see past it. And, in his zeal to be Prince Charming, he is ultimately the agent of his own demise.

Love this bit from Into the Woods. "He has charm for a prince, I guess - I don't meet a wide range."

Email ThisBlogThis!Share to TwitterShare to FacebookShare to Pinterest
Labels: Jeffe Kennedy, killing off characters, Prince Charming, Sorcerous Moons, The Forests of Dru, The Mark of the Tala, The Twelve Kingdoms, The Uncharted Realms