Once upon a time, I had an Instagram account. Oh, the account is still in my name. You can still search on it and find it. But. It is *my* account only by virtue of the fact that I am the one behind the camera. The account belongs entirely to the cats. There might be a sunset or two in there, I won't lie, but the vast majority of the account is all cats all the time. So allow me to introduce my masters: 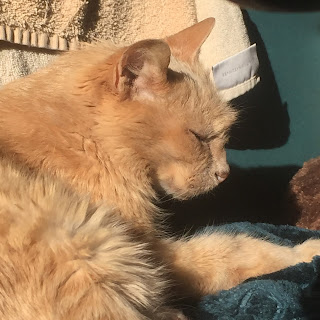 This is Autolycus. He's the eldest at 18 (he'll be 18 in March.) He has fully graduated into a Grumpy Old Man cat post here aboard the boat. He's a super high maintenance guy at this point. He suffers from cholangiohepatitis and the early stages of renal failure. This means a grand total of nine different pills per day, plus the need to feed him every few hours. (Part of the liver disease and the fact that elderly felines can't derive the same nutrition from their food as younger cats. So he needs multiple small meals per day to keep his weight up. The other cats are apoplectic with envy.) This means that in order to preserve the quality of this dude's life, one of his humans must remain with him at all times or hire in a pet sitter. The care and feeding of the old dude are labor intensive enough that when my beloved husband heads to Florida for a wedding in the family, I will remain behind to look after the Little Orange Terror pictured here.  Why go to all this trouble? Two reasons. 1. Taking responsibility for a life isn't a convenience. It's a trust that goes beyond what's easy. There's a saying among animal people: You EARN an old cat (or dog). 2. Because this photo: 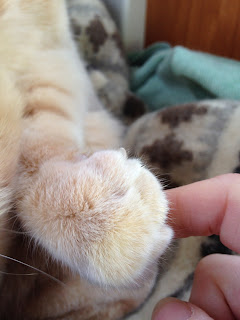 He is super sweet and he honestly appreciates every effort we make on his behalf. He's worked out that his pills make him feel better. So while he dislikes taking them, he sits still and allows me to pill him. The instant I'm done medicating, he's up and rubbing his face against mine while he purrs.

Why yes. I am a sucker and easily manipulated. Why do you ask?

He is snoring beside me as I type this. I don't know how much longer we get with him, but every second is worth the effort.

Then there's Cuillean, the middle child. She's a little camera shy. Getting a good photo of her is hard. She seems to thing the camera is a predator looking right at her. For that reason, her photo is about three years old. Appropriately captioned: All yer pizza R belong to Cuillean. 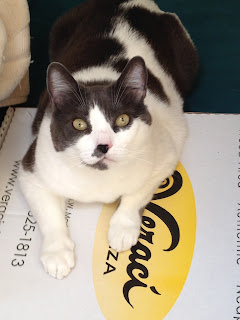 She lives for a warm pizza box to claim for her very own. She's my lap warmer and is the cat most likely to come sit with me while I work. She has a champion purr and radiates more body heat than any cat I've ever known.

She's also exquisitely skilled at human training. She went through a protracted training program with my husband - sitting on his workout bag each morning while he was trying to pack it. He would encourage her to move with "If you sit on my bag, you get pets!" Being the shy gal she is, he'd assumed that would get her off his workout bag. It worked. Twice. And then she had him. The pets became the point. Eventually, she got him wrapped around her paws so much that when the alarm goes off in the mornings, she appears. He is expected to pet her until she flops over on her side and kneads his ribcage while she drools in bliss.

Our youngest is also the queen of the castle. This is Hatshepsut. 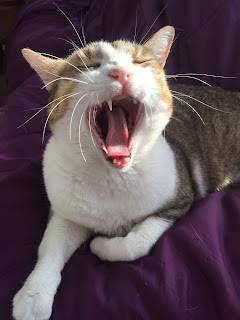 The rumors are true. This is one who decided that me being away for a week was unacceptable. She escaped the boat and went into hiding. This resulted in an emergency flight home on my part a day after I'd gotten to Florida. It was January. I got one day of warm before having to fly home in a panic to look for a cat in 20 something degree weather. I didn't find her. I'd given up looking for the day, was feeding the other two, and from the cockpit came a piteous 'mew?' She'd come home on her own after driving an entire neighborhood crazy with looking for her. Now, when (if) I go away for any length of time, she is shipped, under house arrest to my mother's back room to be locked away until I return.

This is the one who is most guilty of adding edits to my works in progress. She takes my attention to anything or anyone but HER very, very badly. She's also the one who rushes to park on my chest in concern when I'm flattened by a migraine. Kitty purr. Very therapeutic.

Then. Because I live on a boat, there are the random 'pet' encounters. There's the Not My Cat Who Is On My Boat (and MY cats are screaming threats at him): 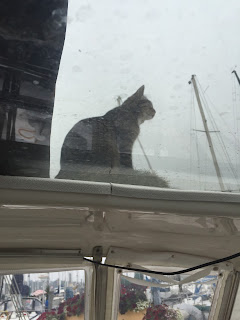 And there's the crow who seems to want to be my pet. She comes straight to me, follows me when I walk down the dock, stands on the dinghy rack staring into the boat to see if I'm here and noticing her. She expects (and gets) whatever cat food scraps the felines leave. I assume someone else trained her to expect to be fed - because she showed up at my boat with clear expectation and no fear of me. At one point, she learned how to meow to get my attention. O_o Or maybe it was to mock the cats. I'm not clear. But every year, she brings me her hatchlings, who never stay - she teaches them to come to me for food, but once they're grown, they bolt and never come back. Not that I mind. One crow with entitlement issues is more than enough, thanks. 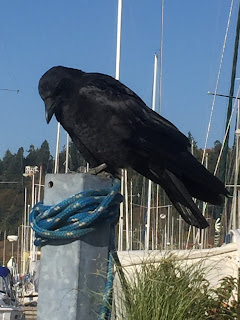 No matter how you slice it. My life is ruled by animals. It always has been. Half the time, they show up in my books as characters. And whenever something diabolical happens in one of my stories, it's probably because one of the cats thought it up first and tried it out. My monsters are a lot of work, but boy, are they worth it.