How Much Ending To Include?

When I saw this week's topic, I thought of the ending of the original "Star Wars" movie versus the ending of "Return of the Jedi." For me, the ending of "Star Wars" was too abrupt. I mean, there was the medal ceremony, the music swells and.....done. Wait. What? I wanted more closure, more conversation, more TIME with the characters. Whereas the ending of "Jedi" didn't feel as rushed to me - there was a big party going on, we got to see pretty much everyone, all was good, all was happy...I left the theater in a contented mood. (Of course at that point we had no idea there'd be sequels/prequels/sidequels/JarJar and etc.)

Of course you can overdo that final closure stuff. There used to be a romantic suspense author whose series I devoured (and I don't remember the author's name or the series any more) but every single book ended with a cookout at the home of the parents (I believe) of the first set of  main characters. Each couple from the previous books would be trotted in with their potato salad or whatever, their new babies, introduced to the woman (or guy) who'd been the heroine in the latest novel...I realize some readers love that kind of scene, catching up with all the much beloved people from the earlier books, but it got to be just too much over the top for me by about the 8th or 10th time. Nothing meaningful was happening, other than John and Jane (made up names) from book #3 or #4 getting a few lines on the page and oh gee, look they had TRIPLETS.

(Clearly she knew what the majority of her readers did want though, so kudos to her! It just wasn't my thing.)

My books usually end pretty close to when the action of the main plot is over. I try to have a scene or at least a moment where everyone takes a deep breath and it's really clear how happy the couple will be with their hardwon Happily Ever After and then we're done.

With Wreck of the Nebula Dream, my take on surviving the "Titanic in space", I did write an extended farewell scene, at a restaurant, and let Nick and Mara, the hero and heroine, say their farewells to everyone in their group who'd survived. I got some less than positive reviews for that, with a few readers and reviewers saying after the breakneck pace of the novel the ending broke the mood, Sorry! I write what I want to read and I wanted Nick to get some closure on his regret at not being able to save everyone. And then go off to his HEA with Mara. 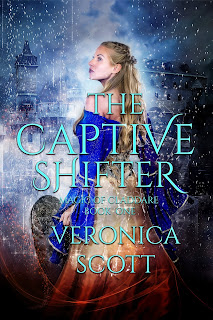 In my latest novel, The Captive Shifter, a just released fantasy romance, Caitlyn and Kyler are getting ready to leave the witch's castle after their victory, and we see them happily heading toward the stables to make their exit. They've already had closure during the climactic finale so there's no extended scene. (I am writing a sequel though.)

In the next scifi romance novel, Danger in the Stars, which is coming in about a week, I do have an epilogue tying off the loose ends, and some characters from other books might briefly reappear (no spoilers) but it just felt right and fun to me to go there, versus ending the book any sooner.

So as you can see, yet again, I'm in no way scientific and cannot measure out for you how much denouement I include in a book. As a person who just sits down and writes the novel without a lot of planning, I do what seems to fit the needs of that story and those characters.

By the way, I just guested on Jeffe's blog last week (waves to Jeffe) and shared an exclusive excerpt from The Captive Shifter, if you want to hop over there for a sample!