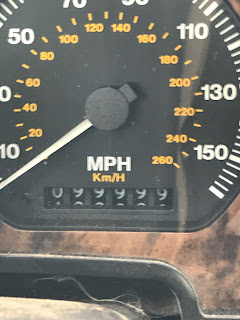 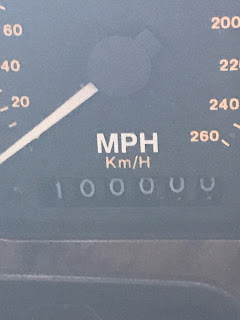 Yesterday my car rolled over to 100,000 miles! I was happy I remembered to keep an eye on the odometer and pull over to snap the pics. She's 21 now and feeling frisky!

Our topic at the SFF Seven this week is "If you had to be on a reality TV show, which one would you pick and why?"

Those of you who know me will immediately recognize that this is NOT my topic. I don't watch many TV shows - we don't have cable, so anything I see is what we stream - and reality shows are not my thing. My main associations with reality TV shows are ancient ones from MTV days where they stuck a bunch of bratty people into a house to fight with each other. Though I do love the character of Brock Hudson in She's All That - where he's recent reality show celeb, who can't stop mugging for the expected cameras. The rest of my ideas come from more current occasional You Tube videos of various surprising competitors on singing shows and several decades worth of cultural memes.

But I'll tell you what reality show almost all of us are a part of, whether we want to be or not: social media.

I know, I know - I've said things on this topic before, but it continually amazes me how some people seem to forget how many "viewers" they have. Social media is a big TV camera - or, rather, thousands upon thousands of smaller ones - aimed at us, recording our lives. We can control what we display for those cameras, but not who sees it afterwards.

And, as with the basic premise for all reality shows, the more drama, the more viewers tune in to watch.

Recently I've seen some authors complaining in "private groups" about reviews and contest scores. Inevitably a few others chime in, with sympathy or adding their own disgruntlement to the fire, and the conversation escalates. On one of those, I notice there are over 1,100 people subscribe to that "private" group. All other authors. In another, the group is smaller, but again it's a fairly rarified selection of other authors, colleagues in the same field of business.

Not only a lot of viewers, but targeted and invested ones.

Part of this complaining verged into criticizing major review outlets - who failed to review the authors' books or reviewed them unfavorably - with aspersions cast as to which are taking bribes to review other books with higher ratings.

And all I can think of is Brock Hudson, making an ass of himself, and thinking that he's accomplishing something. All the while everyone watching is shaking their heads, rubbernecking the drama.