If you're old enough to remember seeing Jaws for the first time (while the CGI and special effects still held up) do you recall whether or not you were traumatized by watching blood spread in the water as people were ripped to shreds by a pissed off shark? I know it's hard to take seriously after nearly a half dozen Sharknado movies, but Jaws was pretty damned trigger-y for its day. Lots of people DID NOT go back in the water after watching that film. Because the movie touched what was a hot button at the time: killing innocent little kids in brutal fashion and showing it on screen. Well. And maybe because our animal brains have a thing about being snuck up on and messily devoured. The thing is that you can look at the film today and see how manipulative the scene with the boy is. It didn't really further plot. It was included solely to illicit horror from an audience and maybe to erase any sneaking sympathy you might have had for the shark. You can dissect the visuals from the John Williams score and neither works quite as well. Combined they are a masterstroke of manipulation.

You see where I'm going with this. Third rails topics generally feel manipulative to me - as if they're being brought into a piece of fiction, not because it's the only way to move the plot, but because it's shock value trying to dress in the grown up clothes of 'but this issue is important!'  That's not always the case, but I do find well done hot button topics are rare. Ursula K. Le Guin is a master at third rail topics. So is Margaret Atwood. Both, I think, are masters because the hot button issues are understated. Almost hidden. They underpin the world and the story, they're sort of the skeleton the stories hang on, but the stories being told aren't necessarily about religion specifically or what constitutes sexual deviancy. They're more about what become of humanity under the influence of those things.

On my more egotistical days, I say I want to be like the aforementioned ladies when I grow up as an author. The rest of the time, I acknowledge that might not be in this lifetime. :D IF there's a topic that gets a lot of knee jerk reaction and I want to pin a story on those bones, I do it. But not so I can trot out some bleeding edge attempt to be literarily relevant. It's because some tiny aspect of that hot button topic fires my imagination and infuses a set of characters with wild, weird life. 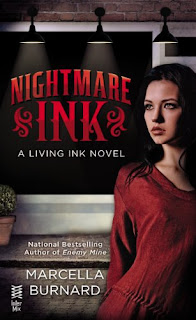 Certainly, it's my job to as respectful and careful as possible when I create a character who'd been adopted into the Navajo Nation but who was not, herself, Navajo. It wasn't done with an intent to be culturally insensitive - but I am not Navajo either, and an argument could be made that - because I'd written about certain traditions and beliefs unique to the Navajo as a means of heightening my heroine's identity crisis - I am touching the fiery hot third rail of cultural appropriation. Does that sentence even scan? It makes sense in my head. That may not be a good thing. In any case. I did my utmost to not be appropriative and to respect the beliefs and taboos that informed the culture my heroine grew up in but couldn't be a part of. I still had a massive case of nerves when the book came out, wondering if I'd get myself electrocuted or not.  (This is Isa from Nightmare Ink.)

And you know, what scares the crap out of me to write, may be totally mundane to some other author. I do suspect that third rail topics are subjective. Unless an editor stands up at a panel and says, "Incest. Brothers in bed in bed together? You guys have GOT to stop sending me that shit." Then yeah. That's for real third rail and that rail is electrified.