Don't let me near a stove. Or grill. Or microwave.

Good morning, blogland! Today people here in the U.S. are building up steam to grill food, wear obnoxious red-white-n-blue clothing, and blow stuff up. Little tiny stuff, for the most part -- fireworks -- but still, boom. This is how my country celebrates its independence.

Remember what I said about food and the cooking of it? People do that! And they do it well.

I am not one of those people.

I don't have a go-to cookout recipe to share. If called upon in such a situation, I typically bring a six-pack of the unofficial beer of Texas, Shiner Bock. (Best American beer. Fight me.)

If I really like the party I'll bring a plastic bowl of pre-cubed watermelon. (Mmmmm, watermelon.)

If I really really like the party -- and it will probably include kids -- I'll bring something like this: 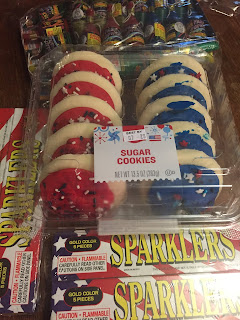 Happy day, folks, no matter what you're celebrating (yeah, sorry about that rebellion thing, England, but a case can be made for you lot celebrating the heck out of today, too). Stay cool!