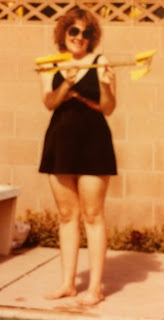 Given that this week’s topic is recipes we make for parties, I can only laugh and say “Round Table pizza” or “Kentucky Fried Chicken.” I do not cook and especially not for parties.

We used to have some pretty fantastic parties in our ‘starter’ house, which came with an old swimming pool. My late husband was an engineer and so were most of his close friends, so he hit upon the idea of holding an annual rubber band powered boat regatta. There was a LOT of intense rivalry, let me tell you, and people held practice runs and trials leading up to the event every year. My spouse published a detailed series of rules and specifications and the designs grew more sophisticated over time. We also did pool volleyball and had other fun and a good time was had by all.
We made sure to give trophies for other categories than just the fastest boat. Memory fails me at the moment but we probably did things like ‘Best Looking’ and ‘First to Sink’. Designing a rubber band powered boat is a lot more complicated than you might think! And the rubber band quality was important to success. And of course vast quantities of beer were consumed during the event.

I think we did the parties for three or four years and then we moved to a place with no pool. The first year in the new house, which was in the foothills, we had a bottle rocket powered car race, the 'Carnival of Speed', but it just wasn’t as much fun, the home built wooden track required seemed to have built in factors which made whoever was in a certain lane always the winner and oh yes, there was a brush fire danger we’d failed to factor in but quickly realized as the first heats were underway, rockets sparking like mad. Water hoses at the ready! I believe we only did this for two years (it was a long time ago, folks) and then we stopped. Just not as much fun, not as much participation, all good things must come to an end.
Switching subjects, I have a new release! Book four in my Sectors New Allies Series, DARIK. 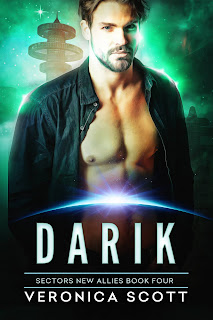 The blurb: Nicolle James is far from her home in the human Sectors, kidnapped by alien scientists to be the subject of horrifying experiments.  Her only hope might be a mysterious soldier she’d glimpsed outside the laboratory fence. She’d managed to sneak a few words of conversation with him when her captors weren’t watching but now the aliens were taking her inside the lab to begin the experiments.

Darik, a warrior of the genetically engineered Badari pack, is on a solo recon mission to check out a mysterious new lab high in the mountains. His orders are strict – do not engage. But when he has a chance meeting with the woman who might be his mate, he vows not to abandon her, orders or no orders.

Can he get inside an underground lab, find Nicolle and rescue her without getting captured himself? And when he learns the lab’s deadly secrets, can he get word to his pack about the new dangers?

Because the ruthless alien scientist running the experiments wants to get her hands on him too and will stop at nothing to achieve her goals.

NOTE: Photos are Author's Own. Book cover by Fiona Jayde.