It's a very special release day here in which Jim adds to the canon of The Predator franchise with the release of this thrilling prequel to the movie! 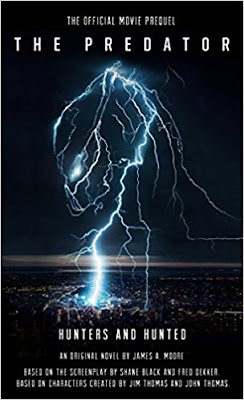 THE PREDATOR: HUNTERS AND HUNTED
The official prequel leading directly into THE PREDATOR. Introduces key concepts that will explode onto the screen in the movie.

For centuries Earth has been visited by warlike creatures that stalk mankind's finest warriors. Their goals unknown, these deadly hunters kill their prey and depart as invisibly as they arrived, leaving no trace other than a trail of bodies.

When Roger Elliott faced such a creature during the Vietnam War, he didn't expect to survive. Nor did he expect that, decades later, he would train the Reavers, a clandestine strike force attached to Project Stargazer. Their mission: to capture one of the creatures, thus proving its existence, disassembling its tech, and balancing the odds between the HUNTERS AND HUNTED.