Projects I Have Abandoned

Do I ever abandon projects? Crafts projects, yes. I used to have an entire sewing room full of bins of fabric and patterns. I was always way more ambitious than my skills actually allowed for. I only just got rid of two fabric turkeys that had been sitting half done for maybe twenty years. In fairness to myself, I did finish two of said turkeys at the time in the 1990’s and OMG were they a LOT of work. I had a needlepoint kit my late husband bought me right after we were married (because I wanted to try it) that sat for even longer than the turkeys, with a few stitches and the threaded needle jabbed into the canvas, until I eventually sold it on eBay because it was a vintage pattern by that time.

I completed a ton of projects in the same time frame – doll clothes, doll quilts, elaborate Halloween costumes, frilly nightgowns for my daughters and their dolls, ornamental pillows, appliqued Christmas tree skirts, all my own clothes in college, pinch pleat fully lined drapes for the bedroom, etc. But for many other projects, the thought of the task and buying the necessary supplies were as far as I got. Either I wasn’t patient enough, my skills weren’t up to the task and the item wasn’t going to look remotely like the photo on the pattern cover, there wasn’t time, I lost interest, newer and shinier stuff came along…

In the day job, we abandoned projects on occasion, usually because the government failed to continue funding them. One I still remember fondly was for a miniature airplane to explore Mars. It would have been an early precursor of a drone, although controlled by its own computer, since the lag time between Earth and Mars wouldn’t have allowed for human control. The group I supervised at the time had been assigned to handle all the contracts in the developmental phase and we loved ‘owning’ it and working so closely with the scientists. But alas. 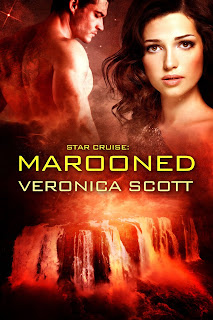 In the writing world? No, I don’t abandon projects. If an idea gets far enough with me that I’m putting words on the page, I’ll finish the book. The fact I’m working on it means I was excited enough about the characters and the plot to need to tell the story and my Muse is fully engaged. I may set a book aside if another book comes to me overnight full-fledged and demanding to be written, like Star Cruise: Marooned did, or Jadrian, but then I return to whatever I had been working on previously and finish it.

Shrug. Everyone works differently and fortunately there’s no one ‘right way’ to be an author or to pursue a writing career!